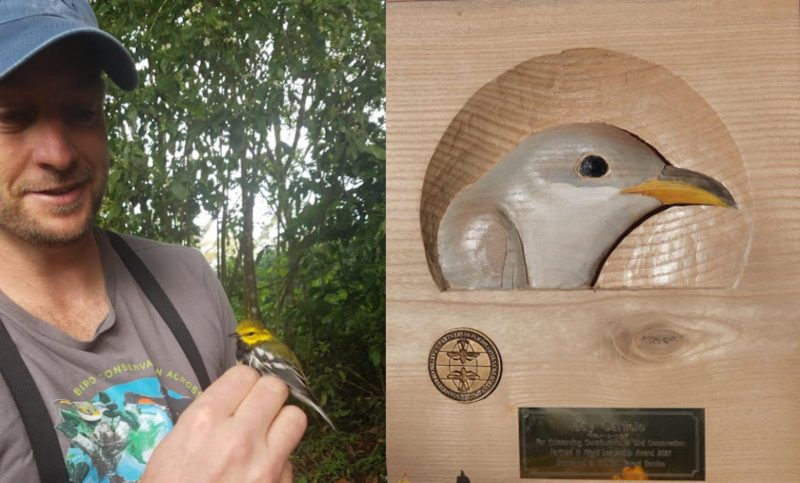 Jay Carlisle, and his Individual 2021 Partners in Flight Leadership Award.

JAY CARLISLE, Associate Research Professor at Boise State University and Research Director for the Intermountain Bird Observatory, has been selected to receive an Individual Partners in Flight Leadership Award for his career avian conservation efforts spanning from 1995. He is a leader in creating effective partnerships, conducting research, and sharing conservation with diverse audiences. His professional objectives are focused on the stopover ecology, habitat needs, and conservation of migratory landbirds, and he is also dedicated to instilling a conservation ethic in students, young biologists, and community volunteers. He has led effective avian conservation partnerships including the Idaho Bird Conservation Partnership, Idaho’s Yellow-billed Cuckoo Working Group, and a program to monitor breeding populations of Long-billed Curlews along with mapping their range-wide migratory connectivity, innovatively addressing illegal shooting, and initiating a Curlews in the Classroom program. He is also involved in the monitoring project for the Cassia Crossbill, Idaho’s only endemic bird species, and in the Rosy-Finch and Pinyon Jay Working Groups. 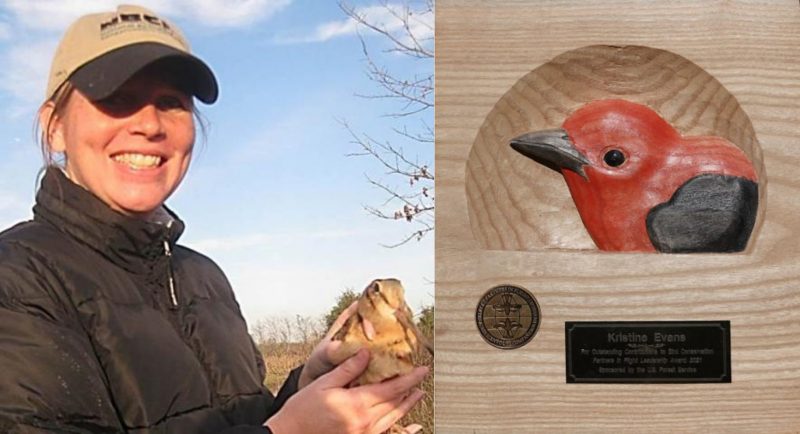 Kristine Evans, and her Individual 2021 Partners in Flight Leadership Award

KRISTINE EVANS, Assistant Professor at Mississippi State University, has been selected to receive an Individual Partners in Flight (PIF) Leadership Award for her contributions to bird conservation science across the southeastern U.S., working through partnerships to affect conservation and developing the next generation of wildlife and bird conservationists. Her investigations and published research on bird conservation have great value to PIF, and she is making enormous contributions with her passion for applied conservation science and willingness to engage in various partnerships. She has contributed through her research on the response of upland birds to Conservation Reserve Program practices, chairing the East Gulf Coastal Plain Joint Venture’s Technical Advisory Team, integrating bird science into the Southeast Conservation Adaptation Strategy, and providing leadership for the American Bird Conservancy’s Tombigbee Forest Bird Partnership. Another impactful facet of her work is her approach of not only educating students, but also involving them in her bird partnership research projects with the ‘end in mind’. 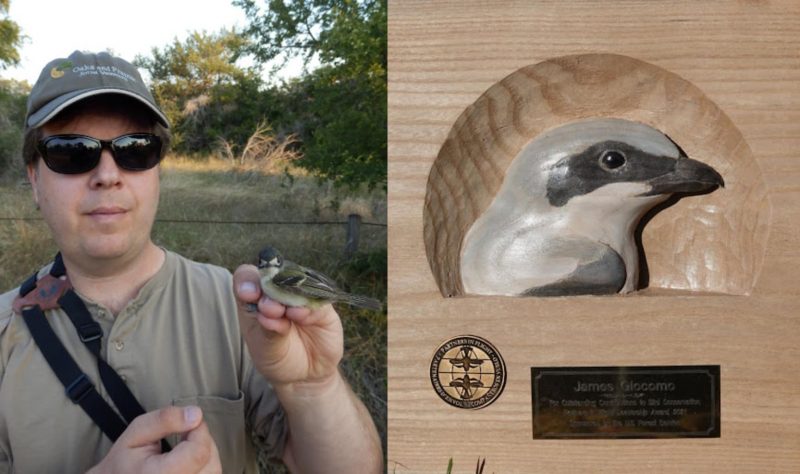 JAMES (JIM) GIOCOMO, Central Regional Director for the American Bird Conservancy, has been selected to receive an Individual Partners in Flight Leadership Award for his contributions to grassland conservation as Coordinator from 2007 to 2021 of the Oaks and Prairies Joint Venture (OPJV), a partnership of agencies and organizations in Texas and Oklahoma. The major focus of OPJV, where over 95% of the land is in private ownership, is reversing declines of bird populations by supporting strategic habitat conservation for migratory and resident birds, especially for grassland bird species. Jim led the partner organizations to develop the OPJV Grassland Bird Conservation Business Plan, shepherded the OPJV Grassland Restoration Incentive Program (GRIP) to provide financial incentives to private landowners for conducting beneficial grassland bird habitat management practices, and designed and managed a monitoring program to evaluate the grassland bird response. Under Jim’s patient and persistent leadership, OPJV partners have made significant progress toward meeting grassland bird habitat and population objectives. 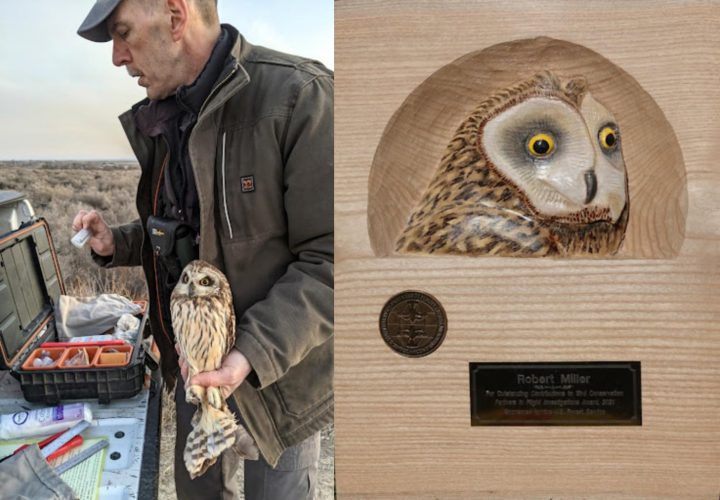 ROBERT (ROB) MILLER, Statistician and Research Biologist for the Intermountain Bird Observatory, has been selected to receive an Individual Partners in Flight Investigations Award for his development and oversight of the Western Asio Flammeus Landscape Study (WAfLS) – a study of the occurrence, distribution, habitat associations, and population dynamics of the Short-eared Owl, which has declined precipitously over the past 40 years. Rob has displayed tremendous leadership, analytical, and public outreach abilities, along with unwavering dedication, in implementing this complex project, now a model, across eight western states, including: writing a successful Competitive State Wildlife Grant, designing a survey strategy, creating a statistical design, recruiting and coordinating agency, public, and private partners with over 1,200 community-science volunteers surveying across 87 million hectares, creating online training modules, conducting all statistical analyses, writing and publishing manuscripts and reports, presenting results at scientific conferences, working with partners to create conservation decision support tools, and administering budgets and in-kind match worth over $1 million.

PROGRAMA DE AVES URBANAS (PAU), CONABIO/NABCI, MÉXICO team has been selected to receive a Group Partners in Flight Public Awareness Award for developing a strong and cohesive network of volunteers that are dedicated to environmental education, monitoring, outreach, training, and public engagement centered around conservation of birds. Coordinated at the CONABIO headquarters in Mexico City, the PAU network consists of organizations, clubs, and groups of bird enthusiasts, all united for the purpose of bird conservation. Individuals including scientists, ecotourism specialists, teachers, students, and members of the general public form the membership of each PAU group, and information and best practices are regularly shared by the members through meetings and social media networks. PAU was established in 2016 in Mexico to build public awareness of its more than 1,100 bird species (of which less than 10% are endemic), where it now has 150 separate program coordinators in over 130 cities, and PAU has since expanded to 13 countries in Central and South America.

VIRGINIA DEPARTMENT OF WILDLIFE RESOURCES (DWR) has been selected to receive a Group Partners in Flight Stewardship Award for their monumental land protection efforts along Virginia’s Eastern Shore. Becky Gwynn, David Norris, and their colleagues at DWR have recently accomplished one of the largest and most important protection efforts for migratory birds on the East Coast of the U.S. Virginia DWR is permanently protecting (in fee ownership) 8,884 acres of bird habitat on the Eastern Shore of Virginia, including the Atlantic side where Saltmarsh Sparrow and Seaside Sparrow have their center of abundance, and the southern tip which supports a spectacular fall migration of over 10 million migrating passerines which use the area as a stopover to rest and refuel. The project costs over $10 million, and has been nearly ten years in the making. Several of the parcels acquired are adjacent to and will expand and buffer two existing Wildlife Management Areas on the Eastern Shore (Saxis and Doe Creek). 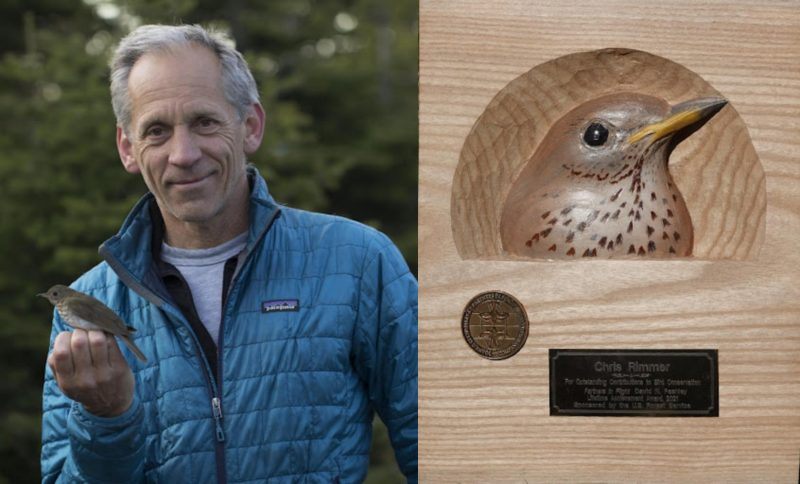 CHRIS RIMMER, Executive Director of Vermont Center for Ecostudies, has been selected to receive an Individual Partners in Flight David N. Pashley Lifetime Achievement Award for his long career of bird conservation impacts, from capacity-building across Hispaniola, rapid assessments in the Greater Antilles, to leading a major conservation research organization. Chris made his first exploratory trip to the Dominican Republic (DR) in 1994 to investigate the winter ecology of Bicknell’s Thrush, and learned these habitats faced unrelenting loss from intense human pressure. For over two decades he has worked closely with dozens of organizations, local biologists, students, and amateur ornithologists from DR, Haiti and Cuba, helping to build their capacity in becoming ecological stewards. He organized workshops and trainings at the Bahoruco Bird Banding Station he established, created the “Two Countries – One Bird” initiative, was instrumental working with partners to protect and restore critical wintering habitat, and founded the International Bicknell’s Thrush Conservation Group to inform and prioritize conservation actions.

Congratulations to all the 2021 PIF Award winners!

Nominate an individual or group for a Partners in Flight Award!