Saying that Brad Jacobs lived a life dedicated to bird conservation is an understatement. Brad’s skills at cultivating partnerships that inspired and connected people to birds led to impacts that are still very much present in Missouri, across the United States, and throughout the Western Hemisphere.

During Brad’s tenure as sate ornithologist for the Missouri Department of Conservation (MDC) from 1987 to 2016, Brad linked MDC conservation work to Guatemala, Honduras, Nicaragua, and beyond—long before full life cycle bird conservation became a fundamental paradigm in the bird conservation community. Brad believed that conservation of birds throughout their annual cycles was imperative, and he pushed MDC to become a pioneer in advancing that vision. He did not stop with Missouri, however; his work there led to the idea that all state fish and wildlife agencies might partner across international boundaries for the benefit of birds, and his leadership was instrumental in making that vision a reality. 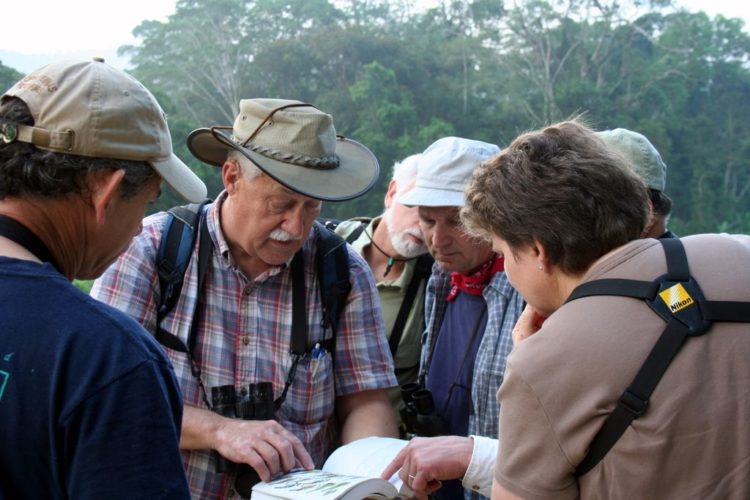 Brad introduced the idea that states could partner for non-breeding season bird conservation at a Partners in Flight (PIF) meeting in 2005. There was resounding support and enthusiasm from PIF, but formalizing Brad’s concept took a lot of work with many partners over a number of years. The Association of Fish and Wildlife Agencies (AFWA) Bird Conservation Committee (BCC) picked up Brad’s idea and initiated an adoption strategy. With general support in 2006 from state fish and wildlife directors, the BCC created a task force, on which Brad served, that further developed the concept and named it Southern Wings. The creation of Southern Wings was endorsed at the 2009 AFWA Business Meeting. A partnership of state fish and wildlife agencies that empowered the conservation of migratory birds across their full life cycle became a reality.

After its creation, Brad worked tirelessly to promote Southern Wings and recruit other states to commit funds to conserve their state’s priority birds on their non-breeding grounds. He created the first Southern Wings outreach brochure and was an active member of the Southern Wings Technical Committee until he retired in 2016. Inspired by Brad’s leadership, MDC provided upwards of $60,000 annually to conserve migratory birds throughout the hemisphere. The Yucatan Peninsula was one of Brad’s first areas of focus, and supporting landscape-scale conservation on the Caribbean slope of Guatemala comprised another important project. To date, over 9,000 acres have been conserved by working with FUNDAECO, the lead bird conservation partner in Guatemala. Other areas of importance to Brad—and Missouri’s priority migrant birds—were Reserva El Jaguar in Nicaragua and Cerulean Warbler non-breeding sites in the Andes of Colombia; both locations have documented 150 species of Neotropical migrants that move through during migration or use these areas for overwintering habitat. Brad and MDC partnered with ProAves and American Bird Conservancy to create a Cerulean Warbler habitat corridor in Colombia, including the purchase of 299 acres to expand the Pauxi Pauxi Reserve, the planting of 500,000 saplings on 2,828 acres, and the training and education of over 4,000 local people to engage in conservation.

If Southern Wings had a father, it would be Brad Jacobs. Brad was no stranger to many developing Mesoamerican biologists, however. He was bilingual, and through his financial support he made it possible for young professionals and students from Central America to be able to participate in the Partners in Flight Mesoamerica Working Group (Grupo Compañeros en Vuelo Mesoamérica) and the Mesoamerican Society for Biology and Conservation Congress (SMBC)—reinforcing bird conservation work within their countries and encouraging regional coordination for the benefit of shared bird species. He funded participation by Central Americans in PIF MESO meetings held in conjunction with the SMBC in Nicaragua (2004), Honduras (2005), Mexico (2006), El Salvador (2008), and Belize (2009). Brad also helped fund participation of the PIF MESO national coordinators at the Fourth International PIF Conference in McAllen, Texas, where the coordinators received a PIF Leadership Award. All of the people who participated in these programs are not only still active in bird conservation but have also moved into leadership roles in their respective countries and in the region—thanks in large part to the support for engagement and training made possible by Brad and others in the PIF Mesoamerican network. 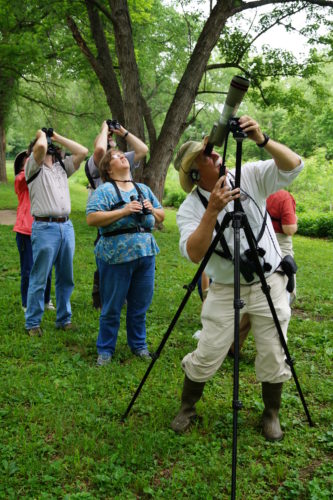 After PIF signed a Letter of Cooperation between the Mesoamerican Society for Biology and Conservation and Partners in Flight at the SMBC Congress in El Salvador in November 2008, the PIF MESO group identified priorities for workshops in association with the SMBC Congress. Brad helped make three workshops come to fruition by leveraging financial resources through MDC so that each Central American country could be represented in the North American Banding Council Certification Opportunity (Costa Rica, 2010), Statistical Analysis and Scientific Writing (Belize, 2009), and the Bird Banding Training and North American Banding Council Certification Opportunity (El Salvador, 2008).

Brad also played an important role in enabling the inclusion of Central America in the PIF Species Assessment Process. Participation in Central American Bird Species Assessment Workshops at San Vito, Costa Rica (2014), Ciudad de Saber, Panama (2015), and Jinotega, Nicaragua (2016) were supported in part by MDC, thanks to Brad’s advocacy. In his last years with MDC, Brad was particularly dedicated to bird conservation efforts in Honduras, including assisting with Robert Gallardo’s new Guide to the Birds of Honduras. In all of these international efforts, Brad worked largely behind the scenes, always modest and listening, ensuring that Central American biologists were front and center—but they were able to contribute in these venues in great part due to Brad’s advocacy within MDC and his passion for and dedication to facilitating the growth of the next generation of bird conservationists in Latin America.

Brad began birding at age 11 and continued a lifelong study of birds for both work and pleasure. He earned a bachelor’s degree in natural resources from Cornell University in 1969 and spent three years in the Peace Corps in Colombia and Ecuador. For part of this time, he worked at the Charles Darwin Research Station in the Galápagos Islands where he taught local schoolteachers about birds and bird conservation in the archipelago. During the remainder of the 1970s, Brad built houses in Colorado and the Missouri Ozarks; he taught building trades on the Navajo Reservation in Arizona in the 1980s, where he studied the bird life of the region and wrote a bird guide, Birding on the Navajo and Hopi Reservations, in 1986.

In 1987, Brad began his career with MDC as a Natural History Biologist, transitioning later to the position of State Ornithologist. He worked on the Missouri Breeding Bird Atlas while attending graduate school at the University of Missouri, where he received a master’s degree in biological sciences with an emphasis in avian ecology. In 2001, Brad authored Birds in Missouri, a full-color MDC publication with species accounts and accompanying essays on current conservation and biological topics. He also coordinated bird surveys for difficult-to-detect bird species, grassland birds, statewide bird populations, and for many of the national bird surveys. For 15 years, Brad organized an annual Bird ID and Conservation Workshop for MDC staff, other agency staff, and folks from the public. Anyone who birded with Brad can attest to his almost superhuman skills at bird identification. In his later years when his hearing declined, Brad remained an expert: he could distinguish, with the unaided eye, Stilt Sandpipers, Lesser Yellowlegs, and dowitchers when even in binoculars they were little more than dark spots on the distant shoreline. 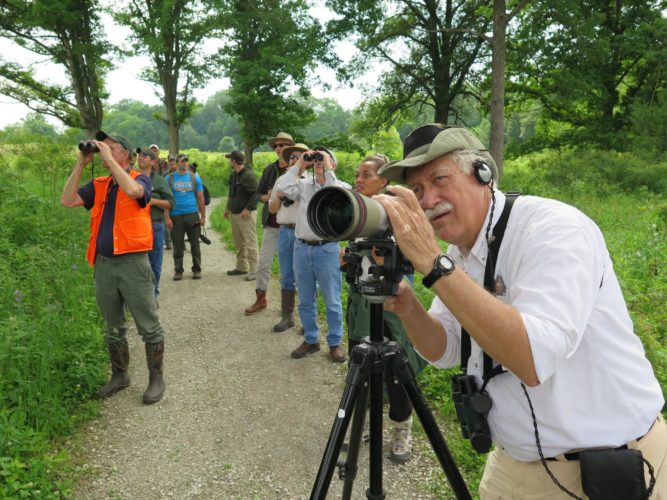 Brad was the recipient of the prestigious Partners in Flight Lifetime Achievement Award in 2016 in recognition of his exceptional contributions to the field of landbird conservation—for his commitment to mentoring, education, and advancing the work of PIF in the Midwest and internationally throughout the hemisphere. He was an active member of PIF from its inception in 1990, helped found and served as chair of the PIF Midwest Working Group, and served on the PIF National Steering Committee until his retirement in 2016, including a term as chair. Brad was a charter member of the board of the Audubon Society of Missouri (ASM) and served as president and board member of the Columbia Audubon Society for eight years. Brad was also awarded the Rudolph Bennitt Award, the ASM’s highest honor, for his dedication to the principles of ASM and contributions to ornithology, the birding community, and conservation of Missouri birds.

Brad Jacobs was a kind and gentle soul, an educator, a naturalist, a mentor, and a solid friend to many. He was a loving husband and father to his wife Linda and their two children, Nathan (married to Julie) and Fresa Jacobs. He was grandfather to Zane and Lia Jacobs and brother to John. Brad had knowledge to share for nearly every situation—tidbits of information drawn from a life deeply and sensitively immersed in the world he shared with critters both winged and fleet of foot. Here’s to that full and diverse life, much of which was dedicated to the conservation of migratory birds. Let us continue to fervently carry that torch as Brad taught and inspired us to do. 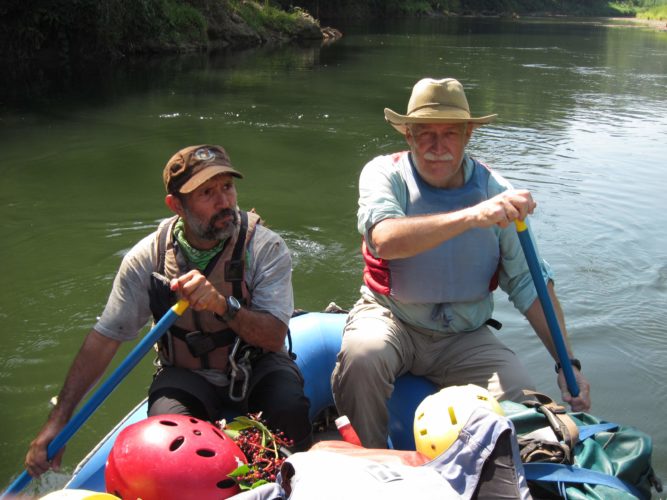