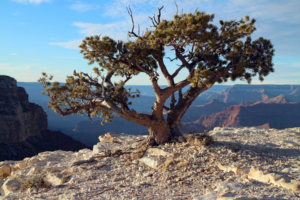 This pinyon pine tree growing out of limestone rock along the rim of the canyon is subjected to a harsher environment than its neighbors in nearby forested areas. Here, along the rim, frequent high winds and a scarcity of topsoil and water make survival more challenging. The root system of a small tree like this can be enormous, reaching down into the rock cracks and fissures, making it possible for the tree to harvest the water it needs to survive. NPS Photo by Michael Quinn.

Pinyons produce compact cones that contain tasty, protein-rich seeds called pinenuts. Pinenuts were a major source of food for Native Americans and are still popular today. Animals like the bushy-tailed woodrat, the pinyon mouse and the pinyon jay also prize them.

The genus name, “Pinus”, is Latin for “pine” and the species name, “edulis”, means “edible” referring to the highly nutritive seeds. In the park you will often see pinyons growing alongside juniper trees.