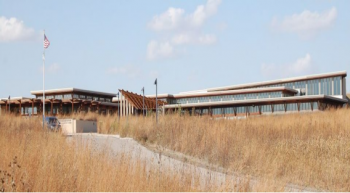 Neal Smith National Wildlife Refuge Visitor Center has about 4,57 feet of windows that could impact birds. Photo by USFWS.

Since the 1970s, bird populations have declined by approximately 3 billion birds. That’s roughly one in every four birds! Recognizing this decline, the U.S. Fish and Wildlife Service and our partners are embarking on a multi-year effort to stop and reverse this trend. Collectively we are enacting a five and one plan that covers five bird guilds: grassland birds, shorebirds, forest birds, aerial insectivores and seabirds, as well as one of the factors contributing to the decline – bird collisions. Additional efforts nationally will include specific work to manage habitat for these birds – work that not only benefits birds, in both the short and long term, but also benefits the many other species
using that habitat.

Ottawa National Wildlife Refuge in Ohio will receive $10,870 for a wide range of window treatments to their visitor center, with approximately 1,140 square feet of window surface that spans three floors. The architectural design of the building was intended to allow for an unobstructed view of Lake Erie from the third-floor observation deck on the north side of the building and to maximize natural light, but this has also made the building a hazard to birds. 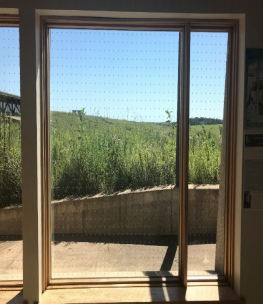 Neal Smith National Wildlife Refuge in Iowa will receive $6,631 for the installation of two inch by two inch dot pattern window treatment decals. Refuge staff investigated options for mitigating bird collisions and, because so many of the windows provide important viewing opportunities for visitors, they decided on the decals. Staff also plan to include visitor center signs and social media posts about preventing bird and window collisions and will provide information about what people can do in their homes to reduce these collisions.

The La Crosse District of Upper Mississippi River National Fish and Wildlife Refuge will receive $4,824 to clean and install window treatments to 54 windows that span 480 square feet. Refuge staff noted that window decals and bird tape were installed on the 2,000 square foot visitor center when it opened in 2012, but few of those designs meet the recommended two by four inch best practices for spacing and some of the original treatments have peeled with age.

Trempealeau National Wildlife Refuge in Wisconsin will receive $1,787 to add window treatments to 16 windows with a surface area that covers about 200 square feet. After purchase of the treatments, staff hope to use a combination of staff and volunteers to pressure wash windows around their Outdoor Wonders Learning Center and to then install new window treatments. Staff will also create social media posts and highlight building updates at the World Migratory Bird Day Festival to share ways people can help birds.

“As is so often the case in our region, it’s heartening to see the number of field offices who share a passion for birds and have shown their interest in this project to help reverse a longstanding trend in lower bird populations due to window strikes and other human related factors,” Regional Migratory Birds Chief Tom Cooper said. “We hope this funding will help these facilities managers protect birds,
encourage other managers to do the same and also spread the word to partners and visitors about important needs in migratory bird conservation.”

In 2019, Rosenberg et al. published a paper in Science that highlighted this shocking decline in North American birds over the last several decades. As the primary federal agency tasked with conserving birds, their findings are a call to action to amplify and expand our work to benefit bird populations and hopefully reverse this disturbing trend.

A nationally led Migratory Bird Program working group put together a blueprint for potential agency response by defining focal species groups and potential actions that we can take to both address this decline and provide simple examples to the public, as well as conservation partners about things that can be done at facilities to reduce threats to birds.

Learn more about what you and your partner organizations can do to make facilities more bird-friendly.

For other questions about bird collision problems, contact Andy Forbes at andrew_forbes@fws.gov or Tom Cooper at tom_cooper@fws.gov