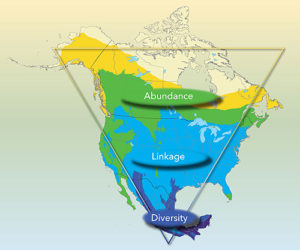 The unique “triangular” geography of North America shapes the birdlife in our three nations. The vast expanses of northern Canada and Alaska support relatively few breeding landbird species added up over such a large area; however, their total numbers are enormous. In contrast, a tremendous diversity of bird species, many with very small global populations, thrives in the narrow region of southern Mexico, where temperate and tropical systems meet. These disparate regions of great abundance and diversity are joined through the annual migrations of billions of birds, funneling southward across the continent each fall and expanding back into the northern latitudes each spring. Preserving this spectacle of birdlife requires a tri-national vision for conservation action. Landbird species richness is strongly associated with latitude. Over the course of the year, more than 350 landbird species may be found in southern Mexico, whereas a similar-sized area in the high arctic will
host fewer than 45 landbird species.