As North America’s largest shorebird, the Long-billed Curlew is a stunning emblem of the western grasslands, with its gliding displays and haunting flight call reaching out across the plains in the spring. Despite the attractiveness of this species to the public, the curlew is declining across virtually its entire range. One area in stark contrast to this trend is British Columbia, where the species has extended its distribution over the past 20 years, as revealed in the recently completed BC Breeding Bird Atlas. This expansion is likely the result of expanded ranching and farming activity on previously unavailable shrub land. However, a purported population increase can actually mask a population sink if productivity is low in the newly acquired agricultural habitat. 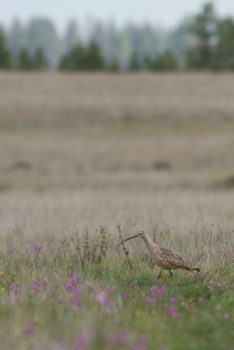 Bird Studies Canada began investigating this hypothesis in 2017 in the Skookumchuck Prairie Important Bird Area (IBA) in eastern BC, in collaboration with PIF partners Jay Carlisle at Boise State University’s Intermountain Bird Observatory, and Wendy Easton at Environment and Climate Change Canada. We located breeding pairs, monitored nests, and captured (and applied seven satellite tracking devices to) birds to follow them locally, as well as to determine their migration routes and non-breeding season distribution.

Nesting success was moderate. Of 6 nests we followed, 2 (33%) failed before hatching due to predation. The eggs from 2 of the 4 remaining nests all hatched, while the eggs from the other 2 nests hatched with 67% success. The fledglings were followed until the end of June, when several of the juveniles congregated in a single ‘nursery’, making assignment to nest difficult. However, at least 2 the young from 3 of the nests were still present at the end of the field season, and likely survived until migration. The females departed the nesting area by the end of June leaving the males behind attending to the young.

Satellite tracking data has been gathered since the tags were deployed in late May. Of the 7 birds we tagged, 2 of the females died in the first month following capture. One was either killed by a predator, scavenged, and was eventually run over by a vehicle 450m from where it was captured, while a second bird was taken by a predator, possibly a Great Horned Owl, 2.5km from the nest site. The remaining 5 birds have since migrated south into the US, with 3 birds (2 males, 1 female) arriving in California’s Central Valley by mid-July. A single male has spent the most of summer post-breeding (July 8-Aug17) around the Malheur Wildlife Refuge, while another male arrived in the Imperial Valley south of the Salton Sea. This divergent migration strategy and weak connectivity of breeding and non-breeding areas among birds nesting within a few kilometers of each other is useful information when designing a conservation strategy for this species. 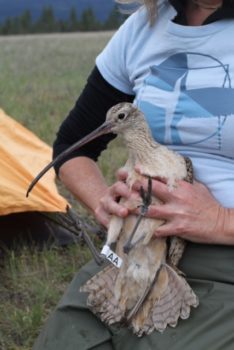 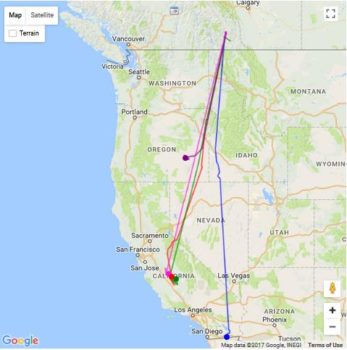 We are currently fund raising for a second field season in 2018, in which we intend to tag birds breeding in the expanded range further north in central BC near Prince George. Keep checking the BSC website at the link above to follow these birds over the winter months.