It’s October and birds are on the move, and none more so than the Blackpoll Warbler. Thousands of these medium-sized warblers are streaming across North America towards the Atlantic coast in preparation for an epic journey to South America. Gorging themselves on insects and fruit, once slim and sleek warblers balloon into puffballs, as they lay down gram after gram of fat in preparation for the journey ahead. Indeed, there are few other species that undergo migratory fattening to this extreme, as 11-gram birds become 20+ gram heavyweights in the space of weeks. Around mid-October, unlike most of us, the birds eagerly await a cold front and as soon as it has passed, they launch themselves across the Atlantic riding the northerly winds south. With so much energy-rich fat on board, these birds are not just taking a casual flight down to the Caribbean islands, indeed they have their sights set on South America: a 2500+ km journey they complete in a mind-boggling non-stop flight. And there the story ends or at least it used to…

Remarkably, where Blackpoll Warblers touch down in South America and what they do on arrival was largely unknown until recently. Beginning in 2016, a joint initiative between Colombian NGO SELVA, the Cornell Lab of Ornithology and Environment and Climate Change Canada, among others, began identifying and describing Neotropical stopover sites under the banner of the Neotropical Flyways Project. Like Partners in Flight, the goal of the Neotropical Flyways Project is to conserve the full community of migratory landbirds, in our case by filling in key knowledge gaps regarding Neotropical stopover sites and strategies. To achieve this goal, teams of Latin American birders and biologists have been carrying out countrywide occupancy surveys across Colombia, Panama, Costa Rica and Nicaragua over the last four years. It was back in the fall of 2016, when surveying multiple sites across the Caribbean coast of Colombia that we discovered an extraordinary concentration of Blackpoll Warblers. 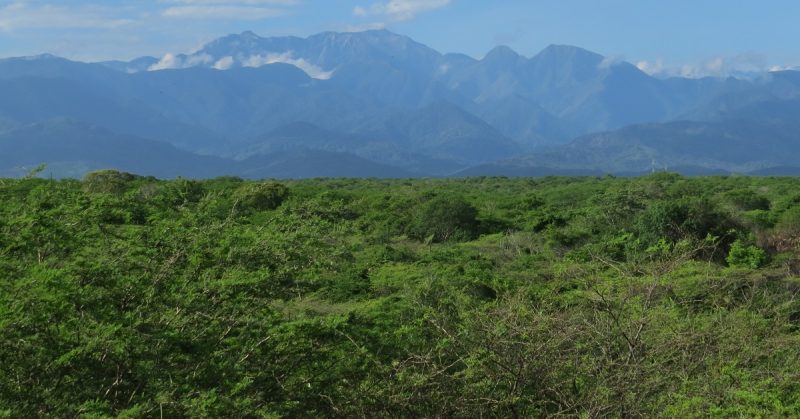 At the base of Colombia’s Guajira peninsula, a major arrival region for Blackpoll Warblers following transoceanic flights, the dry thorny scrub occupied by warblers is within sight of the humid slopes of the Sierra Nevada de Santa Marta. Credit: Nick Bayly

The Caribbean coast of Colombia is a diverse region, hosting a remarkable range of habitats, spanning humid lowland rainforests, tropical dry forests, mangrove forest, montane forest and even snow-capped peaks in the towering Sierra Nevada de Santa Marta. In general, there is a precipitation gradient defined by high rainfall in the west and increasingly drier conditions as one heads east, culminating in the sandy deserts of the Guajira peninsula in the far northeast. Where birds make landfall along this coastline, clearly has strong implications for the habitats and associated food resources they will encounter. As might be expected, most fall migrants concentrate in humid forests on arrival, but this was not the case for Blackpoll Warblers. Contrary to expectations, we recorded close to 1000 individuals in dry thorny Caribbean scrub on the Guajira peninsula and just a handful of birds elsewhere, despite surveying humid forests in the Sierra Nevada de Santa Marta, which are a mere 30 km away as the bird flies.

So, what were birds doing in these habitats that are generally considered migrant poor? To answer this question, we returned in 2017 and 2018 and established a constant effort mist-netting station during the month of October. Over the two years, we captured over 1200 Blackpoll Warblers but importantly we also recaptured 74 individuals, no mean feat when it comes to warblers on stopover. The first thing that struck us was the condition of birds on arrival. A significant percentage of birds were emaciated, lacking any visible sign of the huge fat reserves with which they departed North America and with knife-like flight muscles, indicative of protein burn during endurance flights. For anyone who has handled a healthy 11 or 12 g Blackpoll Warbler, seeing these gaunt birds weighing as little as 8.3 g is both distressing and humbling. Despite the extreme demands placed by trans-oceanic flights, the recaptures revealed a phenomenal capacity for rapid recovery and preparations for the last leg of their journey to the wintering grounds deeper in South America’s Orinoco and Amazon basins. 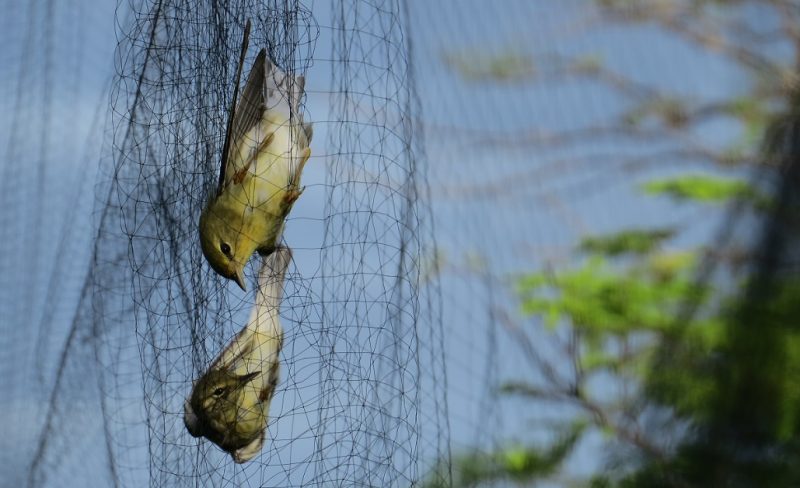 On average, recaptured birds remained at our study site for seven days in 2017 and just 3 days in 2018; however, this was time enough for birds to rapidly rebuild their fat reserves. Most birds increased their body mass by between 1 and 2 g during stopover, equivalent to a 10-20% increase and sufficient for birds to continue to their wintering grounds. So how could this be possible in a xeric habitat dominated by thorny acacias, devoid of fruit or any apparently high-quality food source? Our studies suggest that a key to this whole migration system might be the precise timing of their arrival on the usually dry Guajira peninsula. Plants in the Guajira are considered ecologically dead for 9 months of the year, i.e. they do not grow and do not produce new leaves. However, between September and November a brief rainy season triggers a period of fervent leaf production and growth. The peak of the rainy season just happens to coincide with the arrival of Blackpoll Warblers in mid-October and also with the appearance of hordes of caterpillars munching on the fresh green leaves – perfect food for an exhausted and hungry Blackpoll Warbler. 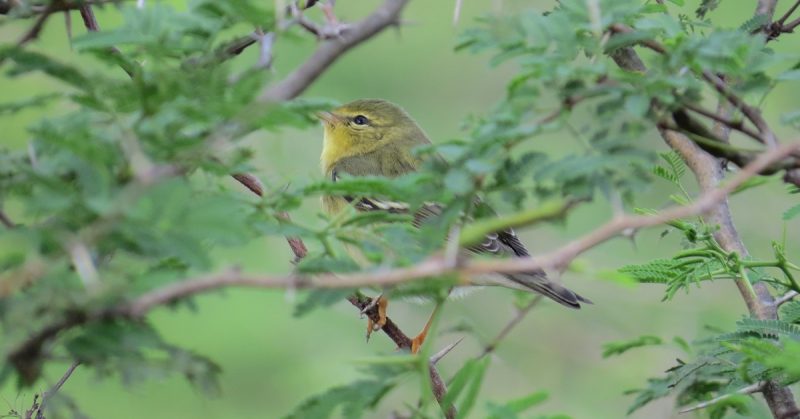 Blackpoll Warblers are not alone in exploiting this brief bonanza. Other trans-Caribbean/Atlantic migrants are also present during October, including Yellow-billed Cuckoos, Prothonotary Warblers and skulking Connecticut Warblers. The astute will have already noted that all of these species are in decline and none more so than the Blackpoll Warbler, which is estimated to have lost a staggering 90% of its population. While we do not fully understand the role of stopovers in the full life cycle of these species, the evidence to date is sufficient to recognize the natural habitats of the Guajira peninsula as a vital link in the migration of several species of concern. Like many habitats throughout the Neotropical region, dry thorny Caribbean scrub in the Guajira is also under threat, being cleared for cattle pastures, irrigation dependent banana plantations and open-cast coal mining.

To counteract this habitat loss, a native tree nursery was established in 2019 through support from the Canada Nature fund and in partnership with local NGO Fundación Iguaraya. We have learnt over the last year that by adding a bit of water we can produce thousands of trees in just three months and are currently in discussions with local landowners, indigenous communities, schools and environmental agencies to start increasing the number of “caterpillar producing” trees in the landscape. If this model works, we hope to be planting anywhere between 12,000 and 18,000 trees a year in areas where the natural scrub has been cleared or degraded, with a view to enriching the landscape for hungry migratory birds. Inspired by the Blackpoll Warbler’s endurance and adaptability to extreme environments, our hope is that knowledge gained through the Neotropical Flyways Project, combined with actions by our local partners, will give this and other declining migratory birds a boost on their incredible hemispheric journeys. 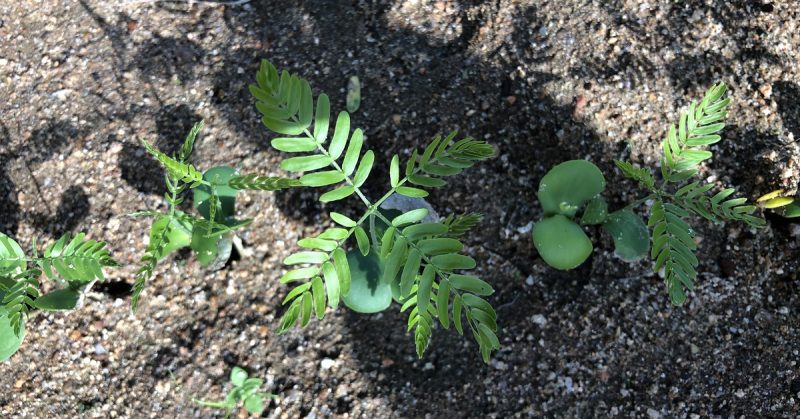