Hummingbirds in the West find nectar after some burns, but not all

WESTERN HUMMINGBIRD PARTNERSHIP, BOULDER, CO [June 11, 2020] – From a hummingbird’s point of view, wildfire can be good or bad. Seven hummingbird species are widespread in the western United States and beyond, including the Calliope Hummingbird, the smallest North American species, and the Rufous Hummingbird, which holds the long-distance flight record.

Along their travels to breeding sites in spring and their return trips to wintering sites in fall, hummingbirds are likely to encounter the effects of fire. Fire has always been an important part of the West’s history and has many benefits, including providing habitat for animals that depend on open areas. For a hummingbird, open areas can signal the presence of flowers.

“Wildfires are an important environmental disturbance,” stated Dr. John Alexander, Director of the Klamath Bird Observatory. “The flowering plants that regenerate after fire are a much-needed source of food for both resident and migratory hummingbirds.” 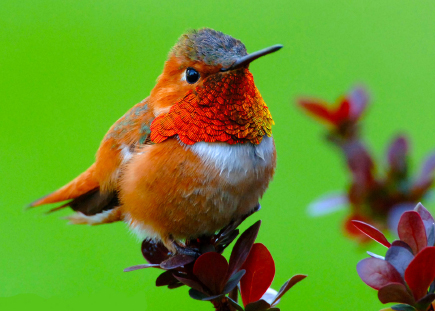 Some hummingbird species are on the decline, including Rufous Hummingbird, whose populations have declined by over 60% since the 1960s. To help protect these small but mighty travelers, the USDA Forest Service formed the Western Hummingbird Partnership (WHP) to bring together researchers and conservationists. A focus of the partnership includes learning how changes in wildfire patterns and restoration of burned habitats could influence hummingbird populations. According to Dr. Greg Butcher, the USDA Forest Service Migratory Species Coordinator, national forests can “play a big role in protecting hummingbirds when restoration efforts after logging and fire include the flowering plants that hummingbirds need.”

With support from the USDA Forest Service Rocky Mountain Research Station and WHP, Dr. Deborah M. Finch from the Research Station collaborated with Dr. Alexander and his research team at Klamath Bird Observatory in Oregon and with Dr. Sarahy Contreras from the University of Guadalajara – CUCSUR to complete a literature review about the effects of wildfire on hummingbird habitat, how restoration actions including prescribed fire affect those habitats, and how hummingbirds respond. Dr. Finch initiated this review because, “there was a necessity to highlight hummingbirds as pollinators whose food source and habitat could be affected positively or negatively by fire and restoration on Forest Service and other lands.” The results detail habitats in nine distinct bird conservation regions from central Mexico to south-central Alaska in a publication titled Effects of Fire and Restoration on Habitats and Populations of Western Hummingbirds. 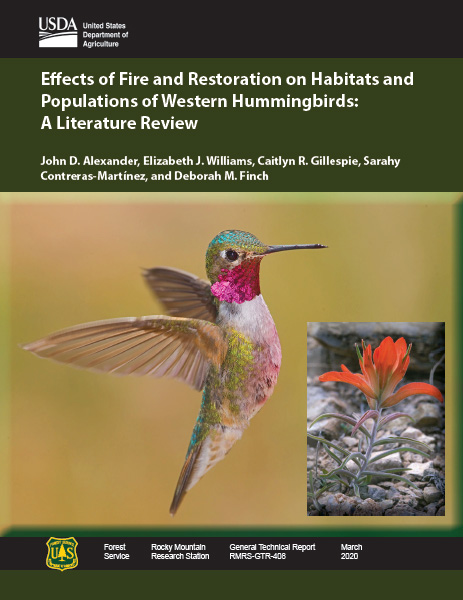 In many forested and chaparral habitats in the western United States, hummingbirds respond well to both wild and prescribed fire. For example, in Alexander’s home state of Oregon, fire creates openings among the large conifers, allowing for more sunlight and the growth of the nectar producing flowers hummingbirds need. During migration, Rufous Hummingbirds feed on purple larkspur, paintbrush, scarlet gilia, and other flowers in areas that have been burned, helping them to refuel for the continued journey.

While fire can offer new sources of nectar for many species in some habitats, elsewhere it may be a disadvantage. The Sonoran and Mojave Deserts seem unlikely places for hummingbirds, but flowering plants such as Ocotillo and Yucca provide a source of nectar that supports species such as the brilliantly feathered Costa’s Hummingbird. Unlike in the Pacific Northwest, fires were not a frequent natural disturbance in these habitats, and hummingbirds may be faced with both loss of nesting sites and food sources after fire. Researchers found that bird diversity, including hummingbirds, declined after fire for as many as four years in these desert habitats, because of the loss of native vegetation that birds need.

WHP is promoting habitat restoration to increase the diversity and abundance of native flowers throughout the West to support populations of hummingbirds and other pollinators. Research on hummingbirds and fire, as detailed here, helps inform this vital conservation work.

Access to the full version of the report is available at https://www.fs.fed.us/rm/pubs_series/rmrs/gtr/rmrs_gtr408.pdf

FOR MORE INFORMATION OR TO ARRANGE AN INTERVIEW, PLEASE CONTACT:

The Klamath Bird Observatory (KBO) is a non-profit organization that advances bird and habitat conservation through science, education, and partnerships. Working in the Pacific Northwest and throughout the ranges of migratory birds KBO emphasizes high-caliber science and the role of birds as indicators to informs and improve natural resource management. KBO also nurtures an environmental ethic through community outreach and education.

The University of Guadalajara is a public educational institution, the second largest in Mexico. The CUCSUR campus and the Department of Ecology and Natural Resources administer Las Joyas Scientific Station located in a core area of the Sierra de Manantlán Biosphere Reserve, where the Long-Term Hummingbird Monitoring Station is located in western Mexico Since 1990.

Rocky Mountain Research Station (RMRS) is one of five regional research stations that make up USDA Forest Service Research and Development. Our scientists collaborate with a range of partners to develop and deliver science and innovative technologies focused on informing policy and land-management decisions to improve lives and landscapes. RMRS serves the Forest Service as well as other federal and state agencies, international organizations, Tribes, academia, non-profit groups and the public.

The Western Hummingbird Partnership (WHP) was created to address concerns about hummingbird populations, including the Rufous Hummingbird. The partnership is a coalition of researchers, educators, organizations, and agencies in Canada, the U.S., and Mexico. Learn more about its work at westernhummingbird.org