Partners in Flight (PIF) Awards recognize exceptional contributions to the field of landbird conservation, in the categories of leadership, investigations, public awareness, stewardship, and lifetime achievement.  We are pleased to announce five of the 2017 PIF Award winners, who were recognized in March at the North American Wildlife and Natural Resources Conference and the Partners in Flight Steering Committee meeting in Virginia. 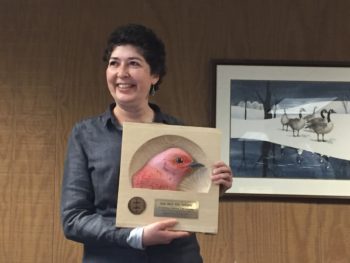 ROSA MARÍA VIDAL RODRÍGUEZ received an individual PIF Leadership Award for her more than 30 years of leadership promoting initiatives in Mexico for the conservation of birds (migratory and resident), their habitats, and their associated biodiversity. In 1989 Rosa María founded Pronatura Chiapas, later renamed Pronatura Sur, which under her leadership has positioned itself as one of the strongest regional and national conservation and sustainable development organizations in the tropics of Mexico, as well as a key active member of several international conservation networks. 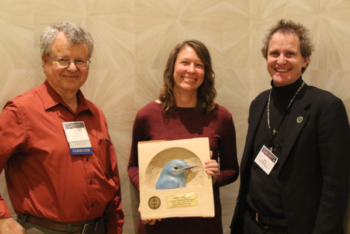 JAIME STEPHENS received an individual PIF Leadership Award for her leadership as Klamath Bird Observatory’s Science Director, and her production and application of science implemented through partner focused science delivery that results in measurable benefits for birds, and the people she works with. Jaime exemplifies excellence in leadership supervising and mentoring a team of incredibly effective, passionate, and productive biologists while also actively engaging and taking on leadership roles in PIF, including the Western Working Group, and within other conservation focused initiatives. She embodies all things PIF.  Also pictured are Greg Butcher and John Alexander. 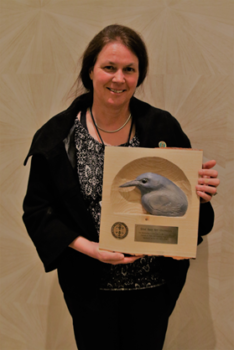 GREAT BASIN BIRD OBSERVATORY (GBBO) received a group PIF Investigations Award for its landbird monitoring, research and conservation in the Great Basin. GBBO has collected data and provided the foundation for science-based decisions over a huge geographic area that is otherwise largely ignored due to the low human population density, yet is greatly affected by a wide range of extractive land uses. Without GBBO, many decisions on public lands throughout the expansive Great Basin would have been largely uninformed by multi-species scientific data on landbirds. Elisabeth Ammons, Executive Director of GBBO, accepted the award. 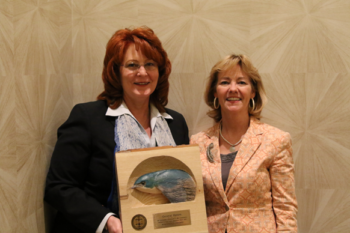 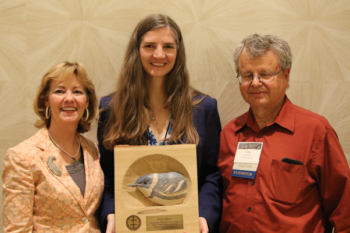