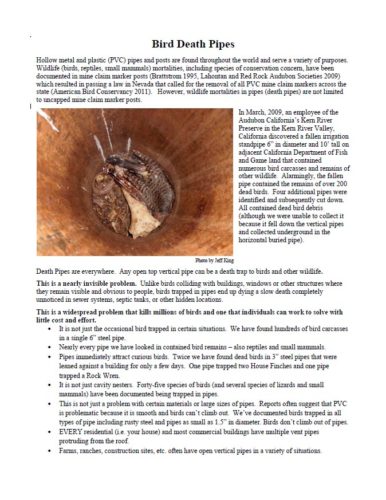 Hollow metal and plastic (PVC) pipes and posts are found throughout the world and serve a variety of purposes. Wildlife (birds, reptiles, small mammals) mortalities, including species of conservation concern, have been documented in mine claim marker posts (Brattstrom 1995, Lahontan and Red Rock Audubon Societies 2009) which resulted in passing a law in Nevada that called for the removal of all PVC mine claim markers across the state (American Bird Conservancy 2011). However, wildlife mortalities in pipes (death pipes) are not limited to uncapped mine claim marker posts.

In March, 2009, an employee of the Audubon California’s Kern River Preserve in the Kern River Valley, California discovered a fallen irrigation standpipe 6” in diameter and 10’ tall on adjacent California Department of Fish and Game land that contained numerous bird carcasses and remains of other wildlife. Alarmingly, the fallen pipe contained the remains of over 200 dead birds. Four additional pipes were identified and subsequently cut down. All contained dead bird debris (although we were unable to collect it because it fell down the vertical pipes and collected underground in the horizontal buried pipe).

Death Pipes are everywhere. Any open top vertical pipe can be a death trap to birds and other wildlife.

Several resources below reveal methods of dealing with this easily preventable bird death.