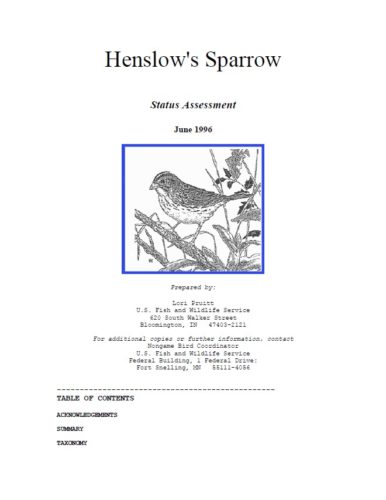 The scientific community has expressed concern regarding Henslow’s sparrow populations for decades, but it has been difficult to document population trends. North American Breeding Bird Survey (BBS) data clearly indicate a significant population decline for this species (since 1966) which is fairly consistent throughout its breeding range. Christmas Bird Count data indicate that the species’ population is also declining on winter range. The distribution of Henslow’s sparrow is scattered and localized throughout its current range. In 1987, the U.S. Fish and Wildlife Service identified Henslow’s sparrow as one of 30 “migratory nongame birds of management concern in the United States” due to the species’ widespread population decline and need for restricted/vulnerable habitats. Henslow’s sparrow is listed as endangered, threatened, or a species of special concern in 16 states and was designated as endangered in Canada in 1993. This status assessment includes summaries of the status of Henslow’s sparrow in 38 states and Canada, which make up the current and historic range of the species.