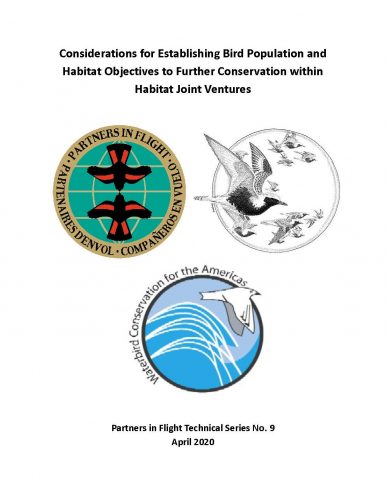 In October 2009, the North American Bird Conservation Initiative (NABCI) held a workshop in St. Louis, Missouri—Developing Population Objectives for Regional Scales. The primary tangible outcome from the workshop was the formation of a writing team whose charge it was to distill the discussions, presentations, and lessons learned at the meeting into a common set of themes; propose standards for the formulation of population objectives; highlight challenges to meeting the proposed standards; and identify strategies to overcome those challenges. The document prepared by the writing team was completed in 2010 but never formally published. Recognizing that there was still much wisdom in the 2010 perspective—despite the many advances in the community’s thinking regarding population objectives and their impact on conservation delivery—the Partners in Flight Science Committee decided to publish the 2010 document, with minor changes, as PIF Technical Series No. 9.