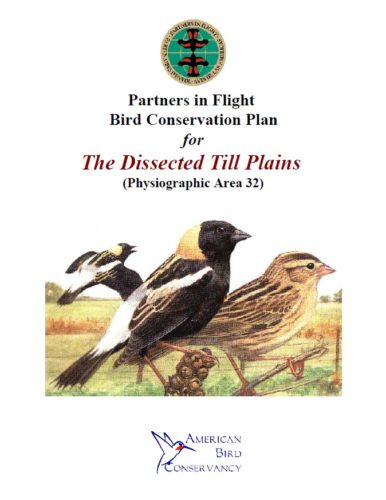 The Dissected Till Plains occupy much of Iowa, eastern Nebraska, northwestern Missouri, and small parts of northwestern Illinois, southern Minnesota and northeastern Kansas. The physiographic area is characterized by moderately dissected, glaciated, flat-to-rolling terrain that slopes gently toward the Missouri and Mississippi River valleys. There is a well-developed, dendritic drainage network of rivers and streams that meander across relatively broad valleys; natural lakes and ponds are rare or non-existent (McNab and Avers 1994). An estimated 60% of the physiographic area was covered by tallgrass prairie at the time of the original land survey, with burr and white oak savannas interspersed and in transition zones between prairies and forested areas. White oak-shagbark hickory forest occurred in the ravines and on slopes of the more dissected areas; bottomland hardwood forest occurred along the larger rivers.

Today, very little natural vegetation exists in the Dissected Till Plains. Forest covers less than 4% of the area, and native grasslands less than 3%. Almost 70% of the physiographic area is planted to corn and soybeans, and nearly 20% is in pasture or hay fields which are concentrated primarily in the southern portion of the region. Loss of habitat is the primary reason for the decline of high-priority grassland, savanna-woodland and riparian forest birds throughout the planning unit. Conservation strategies thought able to improve the status of priority species’ populations emphasize enhancement and restoration of those habitats at both patch and landscape scales.