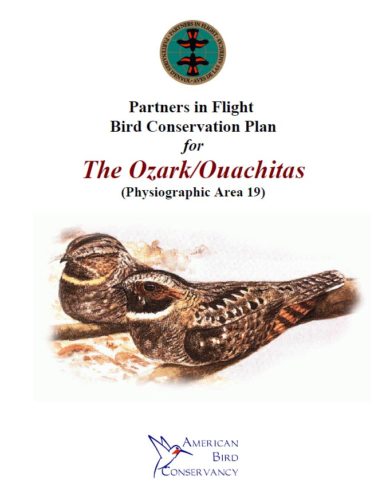 The Ozark/Ouachita physiographic area is largely blanketed by oak-hickory, oak-pine and pine forest ecosystems. Many bird species of Partners in Flight (PIF) conservation priority have centers of abundance in this region. For example, relative abundance data from the Breeding Bird Survey (BBS) indicate that the physiographic area supports over 30% of the world’s breeding population of Whip-poor-wills, over 15% of the world’s Kentucky Warblers and Summer Tanagers, and over 10 % of the Worm-eating Warblers, Yellow-billed Cuckoos, and Acadian Flycatchers.

Conservation efforts in the physiographic area have a proportionately greater ability to impact such species as declines or increases in areas with large percentages of a species global population have a greater effect on their global abundance than if similar rates of increase or decline occur where there are fewer individuals. Further, the reproductive success of forest-breeding birds in the Ozark/Ouachitas appears to be above that needed to sustain local populations, and offspring from birds breeding in the physiographic area may be the sources of individuals that colonize other geographic areas where reproductive rates of forest birds are extremely low.