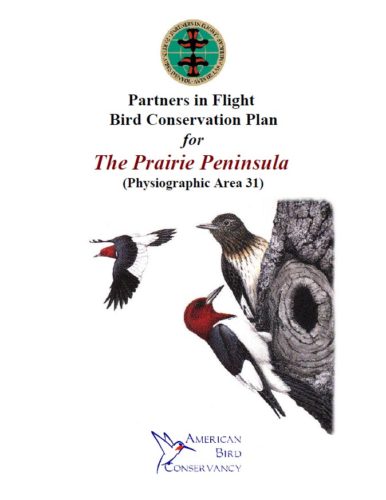 Although many species of grassland birds are still relatively abundant in the Prairie Peninsula, populations of some species (eg. Greater Prairie-Chicken, Grasshopper Sparrow, and Dickcissel) have declined significantly over the past 30 years, in association with declines in the combined regional acreage of pasture and hayfields.

Also within recent decades, many grass hayfields have been replaced by alfalfa monocultures; because alfalfa is cut earlier and more often than the grasses planted in the past, and nests and nestlings of individuals that choose those sites suffer very high rates of mortality during mowing events. Although some species of grassland birds also will nest in cropland, grassed waterways, and roadsides adjacent to agricultural lands, species diversity typically is very low and, again, reproductive success appears to fall far below that necessary to maintain stable populations. Grassland Bird Conservation Areas, with large blocks of core grasslands and a relatively high percentage of grassland in the surrounding landscape, are recommended as a conservation strategy.