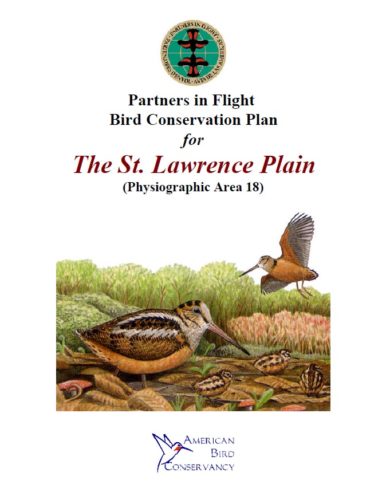 This physiographic area is a vast, flat plain, with elevations rarely exceeding 200m in Canada, and 300m in Vermont and New York. This area was originally a forest-wetland complex, although very little of the forest remains today. It now represents the best farmland in eastern Canada and much of the northeastern U.S. Agriculture has been the primary land use throughout the planning unit for over 200 years, with increasing urbanization and industrialization along the St. Lawrence River. Currently, the agriculture-dominated landscape of the St. Lawrence Plain represents a vast “agricultural grassland,” which supports some of the largest populations of grassland and other early successional bird species in eastern North America.

Unlike in many other agricultural regions, climate and poor drainage conditions favor establishment of freshwater wetlands and promote late season harvesting, which enhance the value of the region to breeding birds. In addition, these grassland habitats, interspersed with numerous freshwater wetlands, are vital to breeding and migrating waterfowl and other wetland bird species. Forest habitats remain primarily as isolated fragments that are reduced in tree species diversity due to repeated selected cutting of sugar maple associates such as hickory, basswood, and butternut. The vast majority of lands in this planning unit are in private ownership.