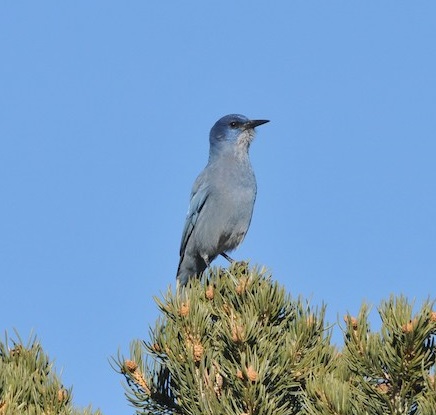 The Pinyon Jay Working Group was formed in 2017 with a goal of bringing together Pinyon Jay experts to discuss conservation needs of the species. The small initial group slowly expanded into a large, diverse partnership (35+ partners) whose goal was to develop a range wide conservation strategy for the species. Working Group partners are concerned by the significant long-term population declines of the species, which are among the steepest declines of any bird in North America. Data from the North American Breeding Bird Survey (BBS) suggest that Pinyon Jay numbers have decreased survey-wide by 3.69% per year from 1967-2015, with an overall population loss of approximately 83.5%. Pinyon Jay populations are predicted to be reduced by an additional 50% from 2016 to 2035 (the so-called population “half-life”). Partners in Flight (PIF) identifies Pinyon Jay as a yellow Watch List species with a goal of reversing population declines. PIF criteria for inclusion as a yellow Watch List species is due to population declines and threats to habitats on breeding and nonbreeding grounds. Pinyon Jay has been identified as a Species of Greatest Conservation Need in State Wildlife Action Plans in most states across its range.

The Pinyon Jay is understudied and poorly known in most areas of its range. The Working Group aims to increase our limited knowledge of the species, their habitat use and requirements across their range, and identify causes of population declines. The Working Group recognizes the challenges of working with a flocking species that uses a large landscape (8,000-15,000 acres) and a wide variety of piñon-juniper and other pine-dominated woodlands and structures to meet their daily and annual requirements. Despite the challenges, the Working Group believes it can fill key information gaps about the species and develop habitat management recommendations that can reduce, minimize or mitigate negative impacts on the jay while working in concert with other management and conservation objectives.

The Working Group strives to coordinate and collaborate among partners to address key information needs for the species across its range, including assessing habitat use and requirements, causes of population declines, and the impact of habitat management on the species. A long-term goal is to develop geographic specific habitat management recommendations designed to ideally benefit the species.

The mission of the Pinyon Jay Working Group is to develop and share the best available science to better understand, conserve, and manage Pinyon Jays and their habitat.

Guidelines to Minimize Impacts of Data-Gathering Activities on Pinyon Jays