A new study demonstrates an improved approach to ensure protected areas enhance and conserve biodiversity. The results of the study were used to inform expansion of the Cascade-Siskiyou National Monument.

A team of researchers from the Klamath Bird Observatory, Point Blue Conservation Science, and other partner organizations used big data and fine-scaled modeling to 1) evaluate an existing network of protected areas in the Klamath Siskiyou Bioregion or southern Oregon and northern California, and 2) to identify and prioritize new areas for protection.  The study used birds as indicators of important habitats and biodiversity. 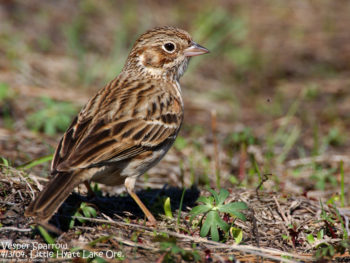 This study showed that grassland habitats, where Oregon Vesper Sparrows occur, were under-protected in the Klamath-Siskiyou Bioregion; the science-based expansion of the Cascade-Siskiyou National Monument increased the amount of habitats protected within the Klamath Siskiyou Bioregion’s network of protected areas, benefiting this at-risk species (Photo Credit – James Livaudais)

The researchers found that the region’s protected areas, including seven National Parks and Monuments, were protecting coniferous forest habitat, however adequate amounts of grassland and oak woodland habitats were not being protected. Birds that are associated with these under-protected habitats have been identified as at-risk at both national and regional scales and the conservation of grasslands and oak woodlands has become a priority. 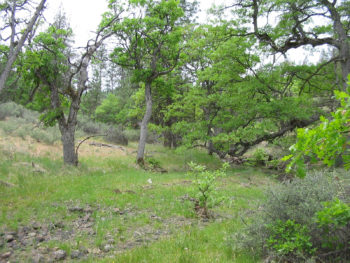 “This study offers robust scientific evidence that expanding the Cascade-Siskiyou National Monument provides critical protection to an amazing ecosystem found nowhere else in the world, and will serve Oregonians well for decades to come,” said Oregon’s Senator Jeff Merkley. “National monuments are American treasures that belong to the people.”

This study and its application offer an improved science-based approach to evaluating protected areas and identifying and prioritizing new areas for protection.  The results were published today by the Ecological Society of America in a special feature of the journal Ecosphere, Science For Our National Parks’ Second Century. The special feature highlights the crucial value of long-term monitoring and scientific inquiry and the role of science in informing natural resource management and conservation on public lands. This research was completed with support from the National Park Service, Bureau of Land Management, and US Forest Service and contributes to the Partners in Flight bird conservation initiative.  A gigantic amount of data used for this research was made available through the Avian Knowledge Network.  The paper can be accessed online at http://onlinelibrary.wiley.com/doi/10.1002/ecs2.1799/full.