Once widely distributed throughout the grasslands of Midwestern United States from the Canadian Prairies to the coastal plains of Texas and Louisiana, the Greater Prairie-Chicken’s distribution has contracted significantly over the past 100 years. There are three recognized subspecies: the nominate (main) subspecies (Tympanuchus cupido pinnatus), Attwater’s Prairie-Chicken (T.c. attwateri) and the Heath Hen (T.c. cupido). The Heath Hen occurred along the East coast of the United States and is extinct. Attwater’s Prairie-Chicken is confined to three locations in southeastern Texas where it is endangered. The core breeding range of the nominate subspecies is now located in Kansas, Nebraska and South Dakota with persisting populations in Iowa, Missouri, Oklahoma, Illinois, Colorado, North Dakota, Minnesota and Wisconsin. Many populations are now isolated from one another and the species is extinct or in danger of extinction in 4 Canadian Provinces and 14 States.

Greater Prairie-Chickens generally do not migrate and will occupy the same habitat year-round. For breeding, they require large tracks of open grasslands with areas of short vegetation where males can perform their “booming” ritual. Booming is a spectacular display behavior performed in leks and during which males vocalize, fight, and exhibit their pinnae feathers and esophageal air sacs. Booming grounds have to be surrounded by relatively dense vegetation cover where the female will nest (<2 km from booming sites).

The main threats to Greater Prairie-Chickens are related to habitat loss, modification and fragmentation. Intensive agricultural activities (e.g. cropland and grazing) are detrimental to the species. Because they require large areas of undisturbed habitat, development of wind and energy projects that further fragment the habitat also contribute to its decline. Although hunting has largely contributed to the extinction of some population. Hunting is still allowed in 6 states where population are numerous enough.

A Plan for the recovery of Greater Prairie-Chicken in Illinois

COSEWIC. 2009. Assessment and Status Report on the Greater Prairie-Chicken in Canada. 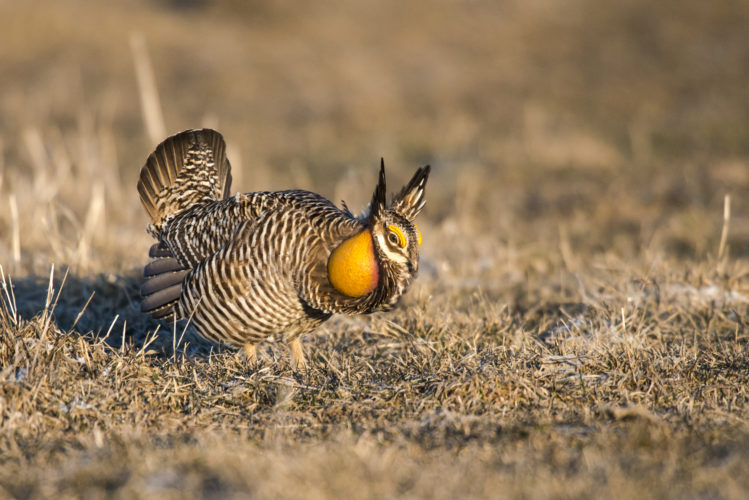 Greater Prairie-chicken male in full display. These birds require large tracks of intact and undisturbed land to go through their lifecycle ©iStock/Frank Hildebrand 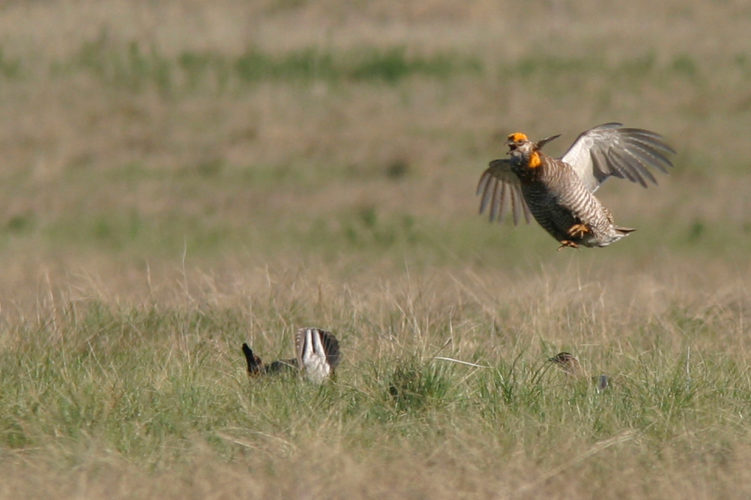 Male Greater Prairie-chickens form leks in short vegetation patches within larger grasslands to attract and mate with females. Females will nest within 2 km of these lekking sites. © Christian Artuso
© Copyright 2023 Partners in Flight. All Rights Reserved. Designed by My Digital Nature.