Bank Swallows, known as Sand Martins in the Old World, are found on all continents except Australia and Antarctica. The species can be recognized by its white underparts and a dark band across the breast. In North America, the distribution of Bank Swallows increased after Europeans settlement due to changes in land use, which created better conditions for breeding and foraging. Bank Swallows excavate burrows for nesting along river banks, lakeshores or coastlines, and opportunistically in aggregate extraction pits. Bank Swallows have successfully adopted human-made banks made of concrete and tubes that are built to replicate natural nesting habitat. During migration, hundreds or thousands of individuals can be observed at dawn joining other bird species landing in wetlands to rest. The species’ impressive flying skills allows it to capture insects on the wing; its diet mostly includes ants, bees, wasps (hymenoptera) and flies (diptera).

In North America, the Bank Swallow population has lost an estimated 89% since the 1970s. In Canada, the breeding population has shown the largest declines, with an estimated 98% loss during that period. The Bank Swallow is designated as a threatened species in Canada given the steep population declines of the last decade. It is currently unknown whether Bank Swallows face the most important threats on their breeding or wintering grounds. However, worldwide declines in insect populations on which the species feeds may explain the dramatic population declines. Changes in agricultural practices and liberal application of neonicotinoid pesticides appear to be reducing the amount of preys for Bank Swallows.

Anyone can help reducing declines in insect-prey populations:
– Join a local organic vegetable and fruit basket program
– At home, plant native flowers that will support populations of insect pollinators
– Buy organic-certified fruits and vegetables, which help reduce the amount of pesticides in the environment

Before the breeding season:
-Prevent Bank Swallows from nesting in areas where operations will be carried out during the breeding season by contouring your piles to have a slope of less than 70 degrees and by creating suitable nesting habitat in inactive areas with vertical faces of at least 70 degrees.
-Install scaring devices to deter Bank Swallows from establishing colonies in active areas.

During the breeding season:
-Avoid intense activity near the colony. You can prevent disturbance by marking off a protective buffer zone around the colony and notifying all employees of its existence.
-Spend a few minutes flattening vertical faces in active areas at the end of the day to prevent Bank Swallows from digging burrows in them overnight or on weekends.
-Stop excavation work if Bank Swallows colonize a bank in an active area. Activities cannot resume until the birds leave at the end of the breeding period.
Do not use scaring devices once the colony is established as they may interfere with ongoing Bank Swallow breeding activities.

After the breeding season:
-If a nesting site needs to be excavated after the birds leave, compensate by providing an alternate site that can support nesting in the following year. To be suitable for nesting, the bank must have a slope of at least 70 degrees.

Recovery strategy for the Bank Swallow in Ontario

Best Management Practices for the Protection, Creation and Maintenance of Bank Swallow Habitat in Ontario 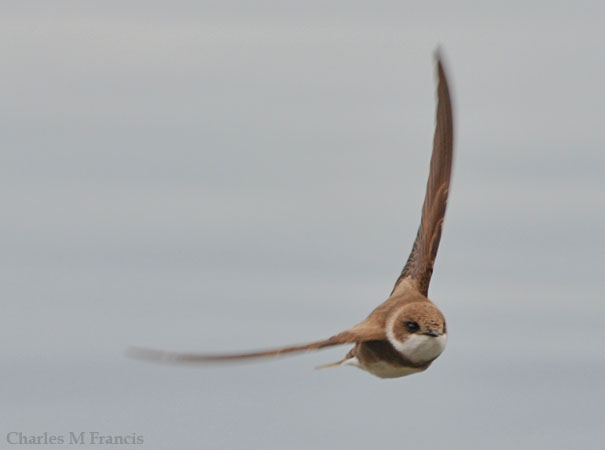 Bank Swallow in flight. The Bank Swallow is a good example of a common bird in steep decline with a population decrease of 89% since 1970 © Charles Francis 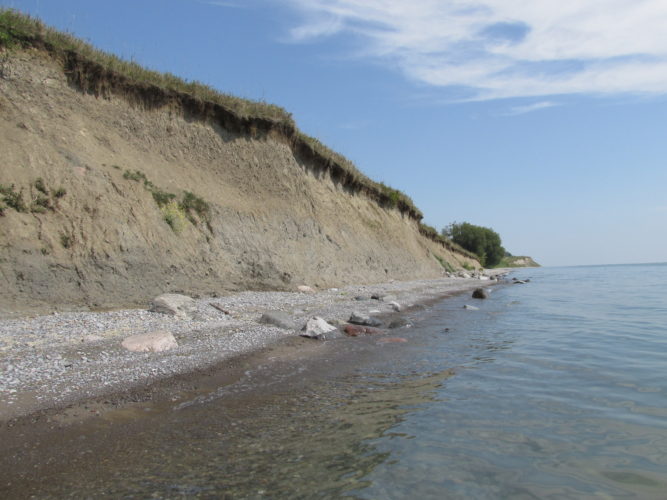 Bank Swallows nest in burrows, often along river banks, but will also nest in excavating pits or other human-made structures that replicate their natural habitat © Tianna Burke
© Copyright 2022 Partners in Flight. All Rights Reserved. Designed by My Digital Nature.
Posting....