The Grasshopper Sparrow is a widespread species found in grassland habitat throughout much of North America. A denizen of open grasslands of intermediate height and density, this species is a good example of a Common Bird in Steep Decline. Rangewide, the Grasshopper Sparrow has lost 68% of its population since 1970, largely due to habitat loss, fragmentation and degradation. Eastern populations have declined even more steeply, disappearing along with historic coastal prairie habitats, and the Florida subspecies is critically endangered.  The U.S. Fish and Wildlife Service designated it as a focal species and it is listed as a species of special concern or greatest conservation need in 35 U.S. states.

Across its large breeding distribution, Grasshopper Sparrows are often locally distributed in a wide variety of native and managed grassland habitats, with the largest populations in the Midwestern prairies. Eastern birds inhabit remnant coastal prairie, as well as un-mowed hayfields and pastures, reclaimed mines and landfills, and airports. In the West, this species breeds in shortgrass prairie, shrub steppe grasslands in the Great Basin, and semi-desert grasslands of the southwestern U.S. and northern Mexico. Western Grasshopper Sparrows winter primarily in the Chihuahuan grasslands of Mexico, whereas many Eastern birds migrate to the Caribbean and Central America, where local resident populations also occur.
View Distribution Map »
Species Profiles Explained »

Wood and Ammer 2015. Grasshopper Sparrow reproductive success and habitat use on reclaimed surface mines varies by age of reclamation. 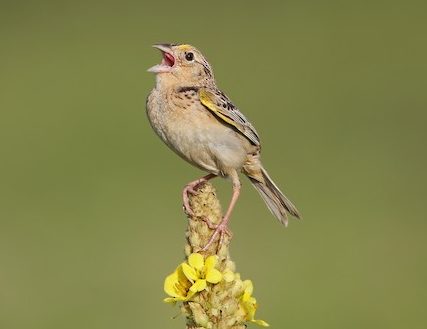 Grasshopper Sparrows are still widespread breeders from southern Canada to northern Mexico, but like most grassland birds they have declined steeply in recent decades. As remnant prairie and pastureland give way to row crops and suburban sprawl, tis species is increasingly dependent on conservation measures in working agricultural landscapes, such as the U.S. Farm Bill’s Conservation Reserve Program. Crane Wildlife Management Area, MA. @ Ryan Schain:Macaulay Library Cornell Lab of Ornithology 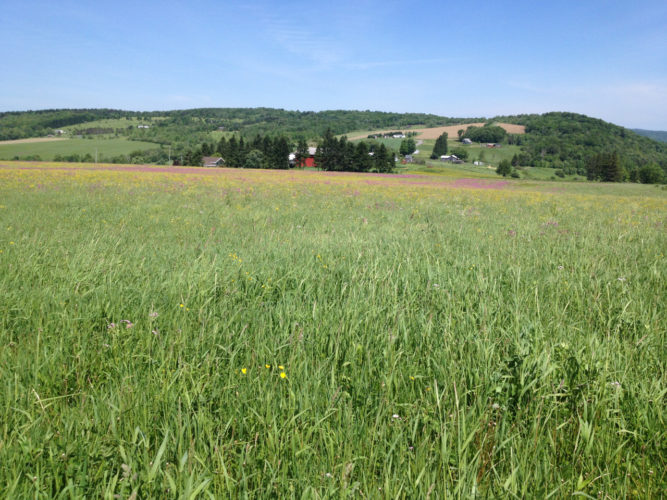 In the northeastern portion of their range, Grasshopper Sparrows breed in large unmowed pastures, a habitat that is rapidly disappearing as dairy farms give way to cropland and suburban sprawl. Cortland Co., NY © Ken Rosenberg
© Copyright 2023 Partners in Flight. All Rights Reserved. Designed by My Digital Nature.