The Long-eared Owl is arguably one of the most social of all owl species, seemingly only exhibiting territorial behaviour close to their nests and wintering in day roosts that can vary from a few owls to several hundred individuals. This species is not confined to North America but rather found all around the temperate forests and meadow complexes of the northern Hemisphere. This species is one of relatively few owls that are truly migratory; for example, North American nesting Long-eared Owls retreat as far as southern Mexico in winter.

Being so widespread, the Long-eared Owl is considered Least Concern globally. It is common in some parts of Canada in the nesting season, although there is considerable annual variation, presumably due to changes in prey availability. Data for this shy species are sparse and difficult to interpret due to its somewhat irruptive and nomadic behaviour. To date, many Canadian Nocturnal Owl Surveys have generally not been analyzed for trend. Nonetheless, indications of population decline in North America have put this species on the PIF yellow watchlist. Threats are thought to include changing forest conditions, agricultural intensification, urban expansion, rodenticides, and, at least in western U.S.A., loss of riparian habitat. 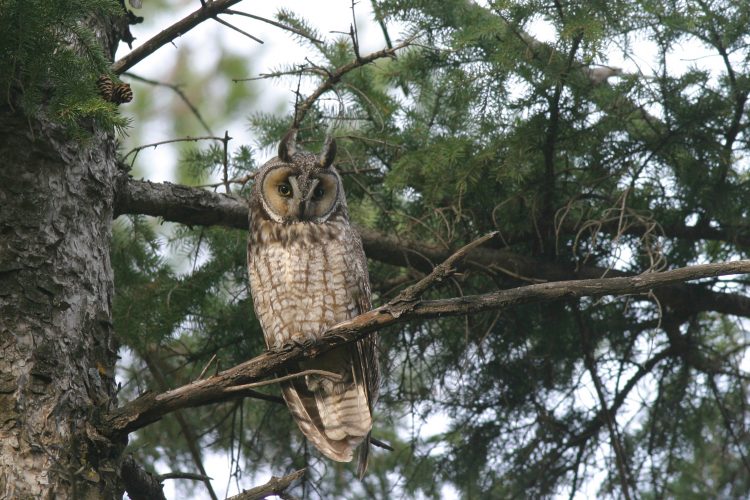 The Long-eared Owl can respond to a glut of prey and nest in small copses of trees surrounded by meadows with good hunting. This is the male of a pair that nested in a shelterbelt © Christian Artuso
© Copyright 2022 Partners in Flight. All Rights Reserved. Designed by My Digital Nature.