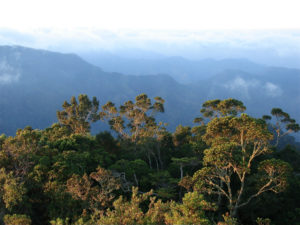 In winter, Olive-sided Flycatchers disperse throughout the eastern Andes, in low numbers elsewhere in South America, and north through the highlands of Central America to Mexico. There, they typically fly-catch from the tops of emergent canopy trees, frequently uttering their far-carrying “pip-pip-pip” calls. Santa Marta Mountains, Colombia. @ Ken Rosenberg