The Tricolored Blackbird has one of the most restricted ranges of any North American bird, with 95% of it’s breeding population in the Sacramento and San Juaquin Valleys of California. Only a few scattered breeding sites exist outside the Central Valley in Southern California and southern Oregon, and single sites in Washington, Nevada, and extreme northwestern Baja California. Like other blackbirds, it is a highly gregarious species, forming massive breeding colonies (up to 200,000 nests reported in one colony) and huge winter roosts that spread out to forage over a large area by day. This Red Watch List species has declined precipitously in recent decades, due primarily to a shift in nesting behavior that has put the species in direct conflict with current farming practices.

Historically, Tricolored Blackbirds nested throughout the Central Valley in freshwater marshes dominated by cattails and bulrushes, and in adjacent riparian willows. With loss of wetlands, more and more colonies shifted to agricultural fields, and this trend has been exacerbated recently by the long-term drought in California. Many recent colonies are associated with dairy farms and feedlots, and especially fields of triticale—a hybrid wheat-rye grain grown as forage for cows. These colonies are highly vulnerable, as fields may be harvested while young blackbirds are still in the nests, resulting in nearly total reproductive failure. A partnership of federal, state, and private landowners is working on solutions, including incentives for farmers to delay harvest, in an effort to keep this species from becoming endangered.

*** indicates insufficient or unreliable data to calculate a half-life estimate.

Meese and Simmons 2010. Safe and effective methods for trapping and color banding tricolored blackbirds in the Central Valley of California

The Tricolored Blackbird has one of the most restricted ranges of any North American bird, with 99% of its breeding population in the Central Valley of California. This Red Watch List species has declined precipitously and breeding populations are severely threatened by current agricultural practices. © Nigel Voaden/Macaulay Library, Cornell Lab of Ornithology

Tricolored Blackbirds are extremely gregarious year-round, and very large breeding colonies can sustain major losses when fields are harvested while young are still in the nests. After breeding, huge flocks gather to feed on recently harvested rice, and in winter they form massive roosts, which disperse over large areas to forage by day. © Ted Beedy/Macaulay Library, Cornell Lab of Ornithology 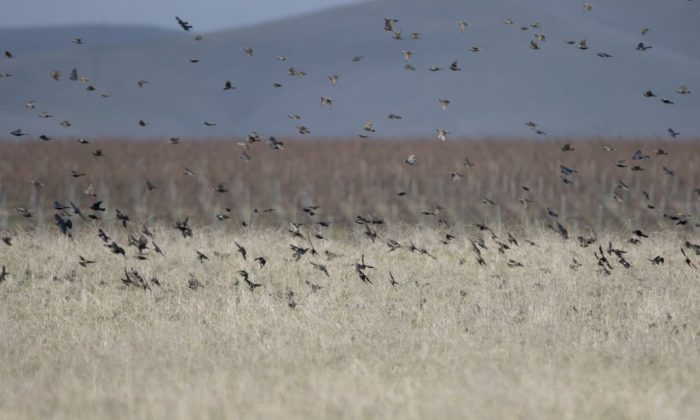 The breeding habitat of Tricolored Blackbirds has shifted over the last half-century, from cattail marshes to active or fallow agricultural fields—especially fields of triticale—a wheat X rye hybrid grain grown to feed dairy cows. This behavioral change has made the species extremely vulnerable to agricultural practices that can affect large portions of the global population. Monterrey, CA © Brian Sullivan
© Copyright 2022 Partners in Flight. All Rights Reserved. Designed by My Digital Nature.