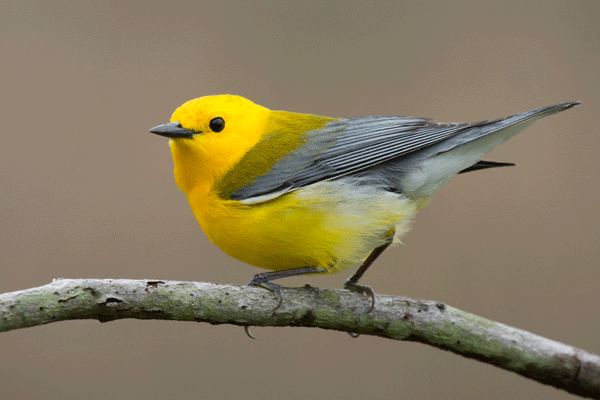 In a recent publication A place to land: spatiotemporal drivers of stopover habitat use by migrating birds, we defined a new migration metric called the stopover-to-passage ratio (SPR). Using eight years of data from 12 weather surveillance radars, we found approximately half of the birds migrating through the Gulf of Mexico and Atlantic coasts of the southeastern U.S. stop within 100 km of its coastlines, totaling ~1.2 to 2.0 billion birds each spring and autumn. Further, the drivers of stopover habitat use differed between spring and autumn migration, suggesting seasonal differences in habitat function. This study is the result of a collaboration between researchers at the University of Maryland Center for Environmental Science’s Appalachian Laboratory, University of Delaware, Cornell Lab of Ornithology, Colorado State University, Georgetown University, University of Massachusetts and Smithsonian Migratory Bird Center.

Below, we answer some questions about this new migration metric.

What is the stopover-to-passage ratio (SPR)?

Millions of migrating birds fly through the night each spring and autumn migration. During the day they stop in trees and shrubs to rest and recover from the night’s journey and to build up fuel for the next flight. These are the two components of the migratory journey, passage (flight) and stopover (foraging). Over the past few years we have learned a lot about each of these phases, where and when birds pass through the airspace and the kinds of habitats we find them in on the ground. But we have only measured passage and stopover in isolation, we have never looked at the two phases of migration together to understand where birds stop in relation to the numbers flying through the airspace at night. The stopover-to-passage ratio is a measure of the proportion of migrating birds that stop in a given area.

Mean stopover-to-passage ratio (SPR), the percentage of passage migrants that stop around the US coastline of the Gulf of Mexico and Atlantic Ocean during spring and autumn.

What was the impetus for creating this new metric and how did the team develop the idea?

Characterization of stopover habitat use relative to passage represents a fundamental gap in our knowledge, primarily existing because a methodology to collect broad-scale information about distributions of birds in terrestrial habitats during the day and in the airspace at night has only become possible with weather surveillance radar. Several recent papers, by ourselves and others, have applied data collected by weather surveillance radars to mapping and predicting broad-scale migratory passage (see BirdCast migration forecasts) or stopover (see Identifying important migratory landbird stopover sites in the Northeast). With this large collaborative effort, it made sense to put these two pieces together for the first time to integrate concurrent measures of passage and stopover. We were able to do this during both spring and autumn migration and bi-weekly within seasons across the entire southeastern U.S. coastline. These are also the first maps of stopover habitat use across an entire region within and between seasons, for any region– globally.

How do you hope to see this applied in future research or conservation practice?

“This paper has some real-world implications for land-managers all across the N. Gulf coast and explicitly IDs high-priority areas for long-distance migrants. We often think we know the ‘where’ to do bird conservation work (land acquisitions, habitat management), but having this paper can explicitly inform those very decisions…for a myriad of neotropical migrant landbird species.” – Jeffrey S. Gleason, Gulf of Mexico Migratory Bird Coordinator, U.S. Fish and Wildlife Service, Mississippi Basin & South Atlantic-Gulf Regions Lower Suwannee NWR

First, these results show the critical importance of the habitats around the U.S. coast of the Gulf of Mexico and within Florida for sustaining North America’s migratory birds. We show for the first time that over half of the birds migrating through these coastlines stop there. Further, disparities in disproportionate selection and absolute abundance at stopover sites revealed potential migratory bottlenecks where geography or restricted habitat may disproportionately concentrate birds along migration routes. This highlights that density of use alone is not a comprehensive measure of the conservation value of a stopover site for migrating birds, a topic that is well studied during breeding but has not been addressed during migration. The areas where the stopover-to-passage ratio is high are potentially more important for migrating birds than was previously thought. 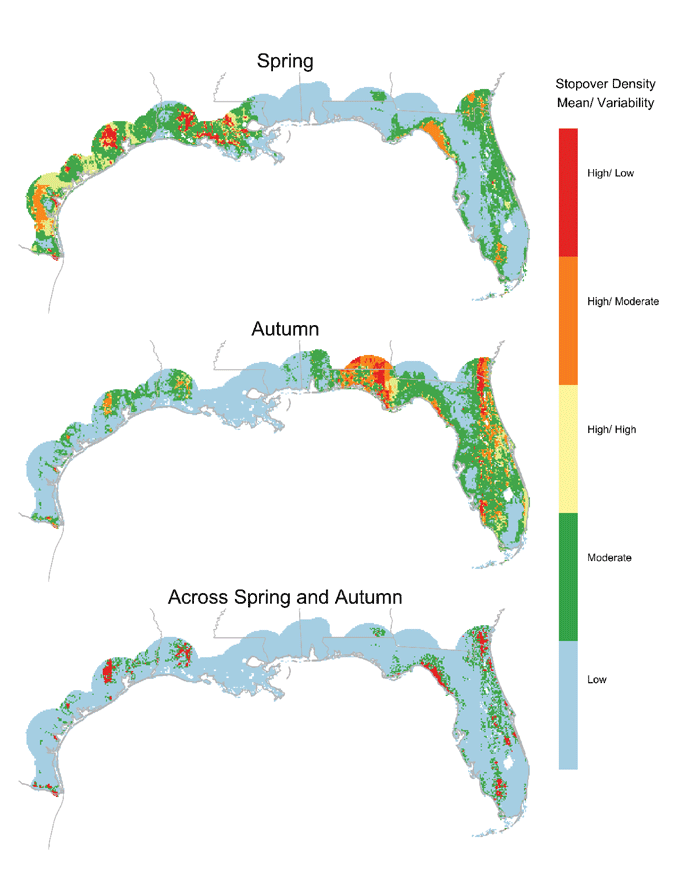 What are the next steps for SPR research?

As declines of most migratory bird species outpace current management interventions, we identify convergence at ‘migratory hotspots’ where targeted management efforts could uniquely benefit the declining abundance of migratory communities. Now that we can quantify the proportion of passage migrants that select a stopover site and map stopover habitat use within and between seasons across entire regions, we may need to rethink how we prioritize stopover areas for conservation. For example, do we target areas for conservation where the absolute densities support high use over areas where SPR supports high selection by passage migrants, i.e. migratory bottlenecks? And are habitats that are consistently used between seasons of higher conservation value than those used only during one season or the other? As a community interested in mapping the road to recovery for migratory birds, it is important that we address these questions about how to prioritize conservation and management of stopover — and airspace — habitat from the Nearctic to the Neotropics. In general, habitats used during migration have been given much less attention than those used during breeding and we will need to change this trend if we hope to halt the rapid declines of migratory birds.

By Zoom -- see connectivity below.