Studying a species that is poorly understood has many challenges, but it also brings opportunity; most importantly the opportunity to build a community from the ground up. That’s the approach we’ve taken to studying the Common Nighthawk. Elegant yet enigmatic: we know little about nighthawks, and yet they are declining in many parts of their range. Our new collaborative study out today in Ecography is a big step in the right direction for this species. 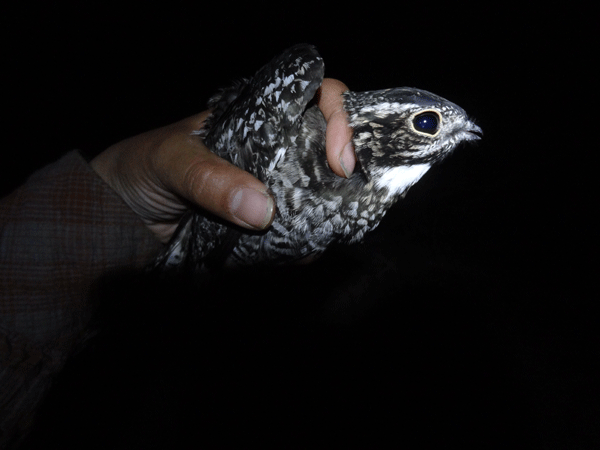 A Common Nighthawk in the hand. Credit: Elly Knight

Collaboration is integral to studying migratory connectivity because it requires synchronous field work across the range of the species to reveal patterns that might be masked at regional scales. This is particularly true in the case of the Common Nighthawk because it is one of the most widely distributed species in the western hemisphere. Common Nighthawks breed from coast to coast and from the Yukon all the way south to Panama. The Migratory Connectivity Project at the Smithsonian Migratory Bird Center initiated our study with funding from ConocoPhillips, and Environment and Climate Change Canada nearly doubled that funding to really go range-wide! And the Common Nighthawk must have a pretty big fan club, because we had no trouble finding partners to help deploy tags. We deployed Pinpoint GPS-Argos tags on Common Nighthawks at 13 locations across North America (our attempts in Florida were unsuccessful; the birds were too light to carry the 3.5 gram tags). 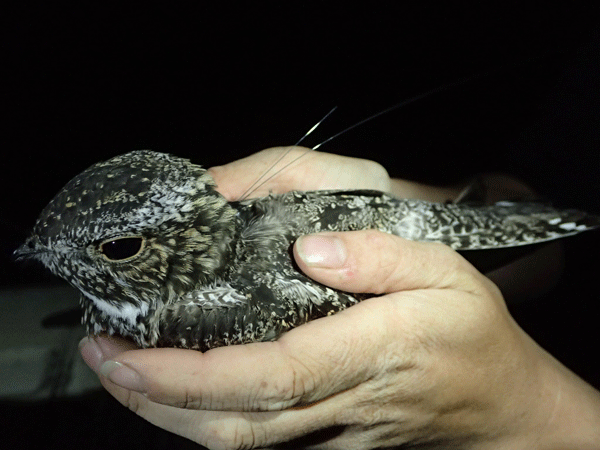 It turned out that continental-scale perspective was key to understanding Common Nighthawk migratory connectivity. Prior to this study, it was unknown which flyways this species uses. All Common Nighthawks we tracked gathered along the Mississippi flyway and took a single migratory route towards their wintering grounds in the Amazon and Cerrado biomes of South America. In fact, this draw towards a single migration route was so strong that one individual from the coast of British Columbia flew 3,000 km due west over the Rockies before beginning their southward journey with the rest of the species. This single route as well as high individual variability in the timing of migration and mixing of populations on the wintering grounds means that there was little migratory connectivity for this species outside of the North America. 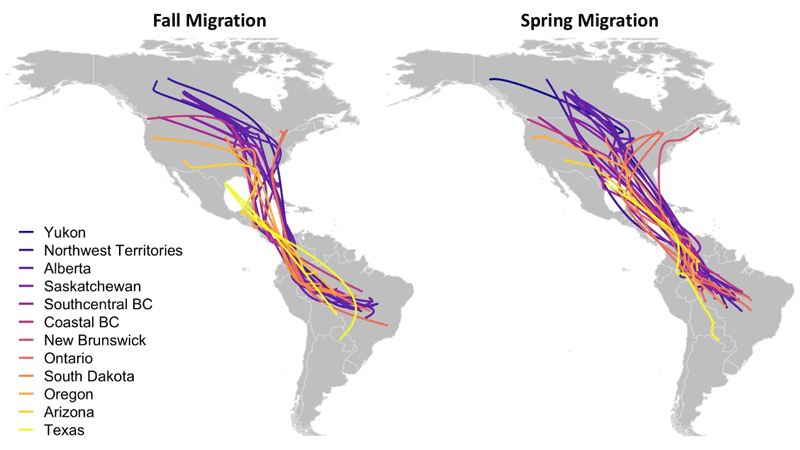 But there were some points during migration where individuals from breeding populations appeared to coalesce. We developed a new approach to evaluating migratory connectivity called ‘connectivity profiles’, which continuously quantifies connectivity during migration to look for places and times where connectivity is elevated. Using this new approach, we found a sharp peak in migratory connectivity before individuals cross the Gulf of Mexico during spring migration. This Orinoco region has previously been identified as an important stopover area for neotropical migrants. We also found a tight bottleneck during fall migration when all individuals were constrained to the Magdalena River Valley in the Colombian Andes. This bottleneck would not be a place that would explain differential population trends, but threats in this location could affect Common Nighthawks at the species level. 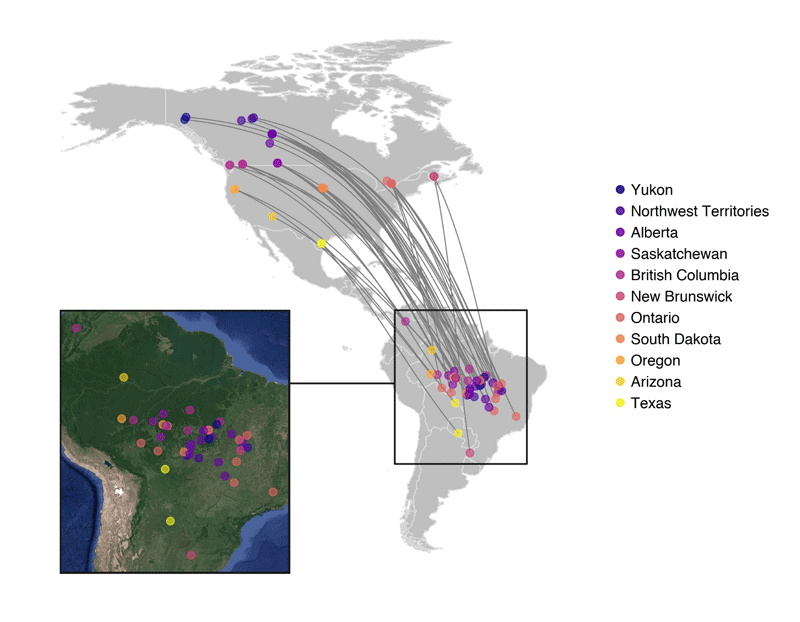 The next step is to quantitatively evaluate potential causes of decline associated with these times of high migratory connectivity, in our case those that might occur in North America and prior to crossing the Gulf of Mexico during spring migration. And this is where help from Partners In Flight (PIF) was key! In order to use migratory connectivity to investigate potential causes of population declines, it is necessary to sample populations along a gradient of population trend, including population growth. We clustered natural populations by trend, and there was only one increasing population: Oregon! We were struggling to find a partner for that population, and so the PIF Western Working Group put the call out on their email thread and the Klamath Bird Observatory (KBO) came to the rescue. Thanks to KBO, we’re now starting to quantitively test potential causes of varying population trends by deriving covariates at the places and times of elevated connectivity and using those covariates to partition variance in breeding ground demographics. We look forward to sharing those results when they’re available.

So where is this all leading us? Down the Road to Recovery of course! In just a few short years, we’ve climbed our way from not knowing which flyways the Common Nighthawk uses, to evaluating vital rates relative to potential causes of declines. PIF has been integral in charting this new road for bird conservation, which is founded in a paradigm of collaboration. One of the Five Game Changers that will help us bring birds back is the ‘unprecedented coalition’ of organizations that have come together to lead this change. The concept of migratory connectivity will help ensure that we also have strong collaboration at the species-specific level as we travel down the Road to Recovery. The collaboration network we’ve built for the Common Nighthawk is already helping us tackle other information gaps at the range-wide scale including diet and gene flow. 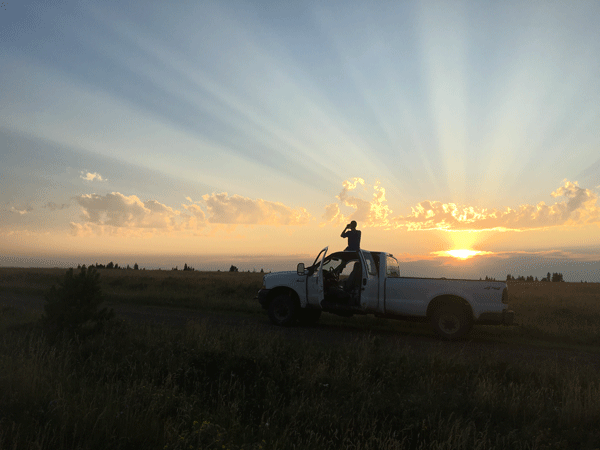 Surveying for Common Nighthawks at sunset in the Cypress Hills of Saskatchewan. Credit: Elly Knight

But we’re still lacking partners from outside the breeding range in our collaborative network! Particularly in northern South America, where we found elevated connectivity, and which may be an important spring stopover region for this species. To fully understand population limitations across the annual cycle, and more importantly, to implement a successful conservation plan for the Common Nighthawk, is going to require an even greater extent of collaboration. And we need a more inclusive collaborative network, including Black, Indigenous, Latinx, and other People of Color. For truly successful Road to Recovery, we need to keep pushing the boundaries of this new collaborative paradigm.

In meantime, let’s acknowledge those that have gotten us to this point! Deep gratitude to all the collaborating organizations and researchers who have participated in this project to date: