In 1989, while I was Executive Director at the National Fish and Wildlife Foundation (NFWF) the board expressed an interest in launching an international conservation program. We had done initial grants to Russia, Canada, and Mexico but did not have a focal direction. When I came to NFWF in 1986 I inaugurated a three year planning process. The first plan for major initiatives featured launching the North American Wetlands Conservation Act (NAWCA) to implement the newly published North American Waterfowl Management Plan, creating the leadership training program for US Fish and Wildlife Service (which became the National Conservation Training Center), and launching the annual “Needs Assessment” to boost the appropriations for federal natural resource agencies.

With the board’s support I commissioned a study of neotropical migratory bird needs in Caribbean and Latin American countries, with a particular focus on the international winter habitats of declining U.S. species. Our study confirmed that the majority of migrants wintered in Cuba, Hispaniola, Jamaica as well as Latin American countries from Mexico to Costa Rica. A few long distance migrants ventured farther. 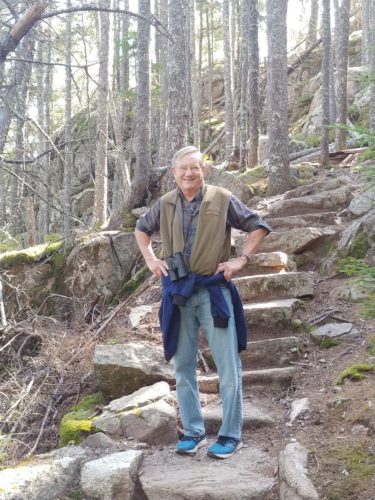 Amos Eno is the president of the Land Conservation Assistance Network

In 1990, NFWF launched the Partners in Flight – Aves de las Americas program at a meeting in Atlanta. NFWF’s vision for Partners in Flight (PIF) was for a comprehensive program addressing the conservation of habitat on both the breeding and nonbreeding grounds. It was envisioned as a habitat-based initiative, promoting conservation of natural ecosystems used by neotropical migrants. It is also proactive in approach — “keeping common species common” — advancing programs to benefit species and ecosystems before they become endangered.

I worked for six months to coalesce support from federal and state agencies; Bob Nelson at the US Forest Service was immensely helpful. Other federal agencies participated as well, including Department of Defense, Bureau of Land Management, US Fish and Wildlife Service, and US AID. We launched the initial PIF meeting in Atlanta in spring 1990 after I hired Peter Stangel to oversee the grant program. I subsequently hired Megan Hill to oversee the international grants from an office in Guatemala City.

Despite a fair amount of skepticism, we achieved consensus and the launch was a success as were the following nine years of grants. The objective of this program was to create a proactive, coordinated, and comprehensive initiative for the conservation of neotropical migratory forest and grassland birds. The primary goals of the Partners in Flight Program are to determine the status and causes of population changes of neotropical migrants; to maintain stable populations and habitats; and to enhance or restore declining populations and habitats through a coordinated program of monitoring, management, research, education, and international cooperation.

Previous conservation efforts for neotropical migrants were limited in scope and piecemeal in approach. Partners in Flight, through working groups and oversight committees, provides a mechanism for communication and coordination of conservation efforts at the federal, state, and local level. Partners in Flight draws upon the resources of federal and state agencies, nongovernmental conservation organizations, academia, industry and private landowner partners to implement effective conservation for neotropical migrants and their habitats. NFWF also sponsored International Migratory Bird Day (IMBD), which helped coalesce support with nonprofits and local communities for Partners in Flight.

In 2020 and the next several decades, the focus of Partners in Flight should be on private land conservation for neotropical birds, because bird habitat is overwhelmingly distributed on private lands across America. Historic patterns of human settlement and water use have left the most productive lands in private hands most often for agricultural uses. Too reverse declines in bird populations and biodiversity we need to provide voluntary incentives and easements to agricultural producers. By using incentive programs that promote sustainable production and implementing carbon sequestration programs for grassland bird conservation habitat, we can keep working lands working while protecting neotropical birds in our central grassland states.