The greatest single threat facing birds is habitat loss and alteration. Birds are excellent indicators of ecosystem health, and suites of rapidly declining species signal significant problems in nearly every terrestrial habitat across North America. According to the U.S. State of the Birds reports, habitats that have experienced the greatest reductions in extent and quality include aridlands such as sagebrush and desert scrub, forests, and grasslands. See below, and read Conservation Action Makes a Difference to learn how Migratory Bird Joint Venture partners are tackling the issue of habitat loss.

Severely declining aridland birds indicate that desert, sagebrush, and chapparal habitats in the western U.S. and Canada are facing some of the greatest challenges. Eighteen of 64 aridland bird populations are sharply declining, with Bendire’s and Le Conte’s Thrashers experiencing the steepest declines.

The primary threats to aridland ecosystems include habitat loss and fragmentation from residential and energy development, as well as reductions in habitat quality from unsustainable land use practices, invasive non-native grasses, and encroachment by trees and shrubs. Severe droughts in recent years have exacerbated problems, making these ecosystems that will likely face additional challenges in the future due to projections for reduced and more variable precipitation in the Southwest due to climate change.

One of the greatest challenges wildlife and habitat managers face in aridland ecosystems is preparing for the projected impacts of climate change. The Sonoran Joint Venture and Point Blue Conservation Science recently teamed up to create PLuMA (Planning for Landscape Management and Action/Plane’acion para el Manejo y Adapti’on de Paisajes), an interactive, online decision support tool that helps land managers visualize projected changes to both birds and their habitats in response to climate change. The tool will help determine if land management and adaptation strategies in the southwestern U.S. and northern Mexico are making a difference. Among the 67 species modeled are Partners in Flight Watch List birds: Bendire’s Thrasher, Le Conte’s Thrasher, Wrentit, Band-tailed Pigeon and California Thrasher. 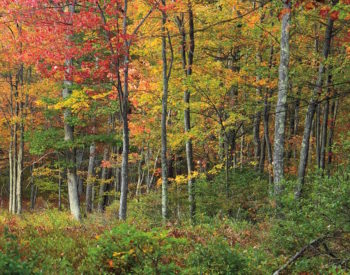 The most steeply declining species within temperate forests include birds dependent on either disturbed and early successional habitat, like the Golden-winged Warbler and Rufous Hummingbird, or mature deciduous forests, such as the Wood Thrush and Vaux’s Swift. Working with landowners on both public and private land to manage forests in a mosaic of age classes, as well as maintaining natural disturbance regimes such as fire on the landscape, will be necessary to reverse declines of many forest birds. Additional threats include urban and ex-urban development, overabundant deer populations in the east, and exotic insect pests and diseases.

Boreal forests support the greatest number of breeding birds in Canada and the U.S., most of which are of low to moderate conservation concern. Of species facing the steepest declines, most are long-distance migrants that winter in the shrinking tropical forests of Mexico and further south. Boreal forests are under increasing pressure from exploration and extraction of oil and natural gas, causing permanent loss and fragmentation of these slow-growing forests. Unusually mild winters and summers, consistent with global climate change, have increased the proliferation of spruce bark beetles and contributed to more frequent and larger fires in recent years.

With support from the National Fish and Wildlife Foundation and the NRCS Working Lands for Wildlife initiative, state and private partners within the Appalachian Mountains Joint Venture have created tens of thousands of acres of early successional forest for Golden-winged Warbler and American Woodcock. Similarly, Klamath Siskiyou Oak Network partners have restored 6,000 acres on federal, state, and private lands in southern Oregon and northern California, benefiting oak-dependent birds such as the Oak Titmouse.

One third of all grassland birds are on the Watch List due to steeply declining populations and threats to habitat. Prior to European settlement, prairies stretched unbroken from Canada to the high plateau of central Mexico. After centuries of decline, large, intact grasslands exist only in a few locations in North America. Tallgrass prairie has virtually vanished in the eastern portion of its former range, and western grasslands within the Great Plains continue to suffer a 2% decline annually. Between 2009-2015, 53 million acres of grassland were converted to croplands across the Great Plains alone. Grassland birds have declined from historic levels more than any other group of birds.

The Chihuahuan and Sonoran grasslands of northern Mexico are important wintering grounds to grassland birds breeding in the Great Plains. Large-scale agricultural conversion and overgrazing in the Chihuahuan grasslands are also driving the strong declines in Sprague’s Pipit and McCown’s and Chestnut-collared Longspurs.

The Northern Great Plains Joint Venture is focused on enhancing the ability of working landscapes to sustain populations of priority landbirds. Spearheaded by the World Wildlife Fund, the Plowprint report is bringing sharp attention to the rapid decline in remaining grasslands and highlighting the subsequent loss of birds and pollinators. This “plowprint” is a tool that maps lands cultivated for crop production and targets opportunities for conservation and monitoring landscape change. The Plowprint identifies specific countries where enhanced Farm Bill delivery and other approaches will improve the sustainability of rangeland management.