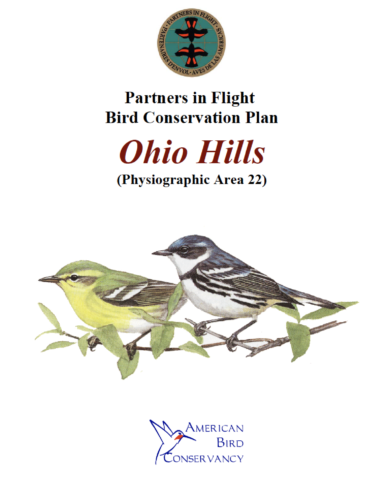 Landforms within the Ohio Hills consist primarily of dissected, unglaciated plateaus ranging in elevation from 150 m to 450 m, with some valleys as low as 100 m and some mountainous areas reaching 1,100 m. A majority of the planning unit was dominated historically by oak-hickory forests; today these cover roughly 4.3 million ha (10.7 million ac), or 54% of the physiographic area.

Numerous patches of northern hardwood forest occur on north-facing hillsides, particularly near the edges of the Allegheny Mountains in West Virginia and Allegheny Plateau in Ohio. Historically, oak-hickory and oak-pine regeneration was dependent on fire, and recent policies of fires suppression in the southern Appalachians has had major (primarily negative) effects on native forest composition and structure.

Human populations are relatively sparse through most the physiographic area and are largely confined to the larger valleys; Pittsburgh, PA and Morgantown, WV are the largest cities. Roughly 40% of the physiographic area is in agricultural production or urban development, mostly in the northern half. Timber extraction has been a major activity throughout the history of this region, and it continues to be important on both public (10% of area) and privately owned forest lands.

Extraction of minerals, oil and gas, and coal are also important land uses throughout this region, with a new wave of mining underway in the form of highly destructive mountaintop removal.