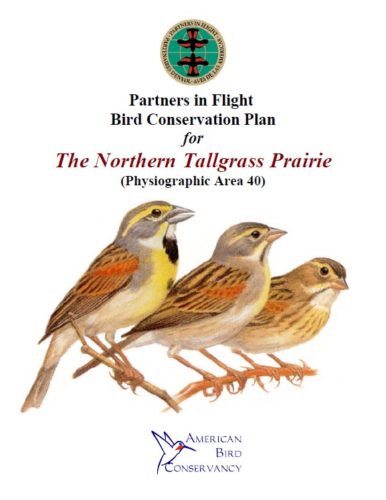 The Northern Tallgrass Prairie physiographic area occupies the eastern portion of the Prairie Pothole Region, the most important waterfowl production area of North America. While very little of the area’s native vegetation is left, active habitat restoration and enhancement for waterfowl conservation has been ongoing since the Prairie Pothole Joint Venture (PPJV) of the North American Waterfowl Management Plan was established in the mid-1980s Within the past few years, Partners in Flight (PIF) has been working with the waterfowl conservation community in the PPJV to integrate game and non game bird conservation, so that the entire avifauna is secure. This plan offers managers and decision makers in the PPJV information on how better to make that goal a reality.

Grassland birds are a very high priority in the region, as many species are characterized by consistent and dramatic population declines throughout much of their ranges. Grassland Bird Conservation Areas, consisting of 800 ha (2,000 acre) grassland cores within a 4,000 ha (10,000 acre) matrix also containing at least 2,000 acres of suitable grassland habitat are being promoted as a model for landscape scale grassland bird conservation. The concept is currently being tested by scientists at the Northern Prairie Wildlife Research Center at Jamestown, ND.