The Le Conte’s Thrasher is an uncommon resident lowland desert scrub habitats of the American southwest and northwestern Mexico, inhabiting some of the most desolate habitats on the continent. Although the species is listed as Least Concern by the IUCN, it is on the PIF Red Watch List because of its restricted range and steep population declines since 1970. In California the Le Conte’s Thrasher is designated as a species of special concern by the Department of Fish and Game.

There have been surprisingly few studies on this species, but the availability of suitable habitat appears to be the major limiting factor for the Le Conte’s Thrasher population density and distribution. Loss of habitat from development and conversion to irrigated agriculture and livestock grazing threaten the sustainability of this species’ population. Additionally, competition with other sickle-billed thrashers (California and Crissal Thrashers) may be a factor in some portions of their range as the highly territorial Le Conte’s Thrasher is never found concurrently co-occupying territories with congeners.

Le Conte’s Thrasher is on PIF’s Red Watch List because of its restricted range and its small and steeply declining population—a loss of 67% since 1970. In the U.S. it is highly dependent on public lands, especially lands managed by the Bureau of Land Management. © Donald Sutherland:Macaulay Library, Cornell Lab of Ornithology 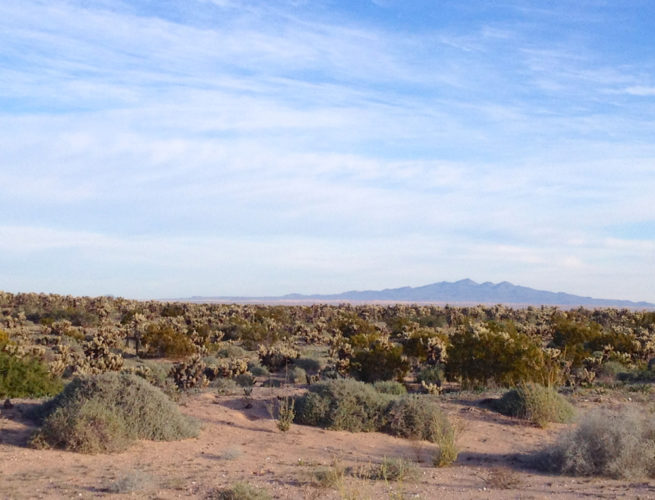 Le Conte’s Thrasher inhabits some of the sparsest desert scrub areas of the southwestern U.S. and northwestern Mexico, such as bare sandy or alkali flats with only scattered shrubs (primarily saltbush) and cactus. La Choya, Sonora, Mexico © Ken Rosenberg

The Le Conte’s Thrasher is a terrestrial bird, probing for arthropods with its long curved bill in the sparse leaf litter beneath desert shrubs, and running across the desert floor with its tail held high. © Brian Sullivan:Macaulay Library, Cornell Lab of Ornithology
© Copyright 2023 Partners in Flight. All Rights Reserved. Designed by My Digital Nature.